The issue of a Chinese name for a brand

Hermès has been confronted with an serious legal problem for several years: a company that makes clothing for men - Dafeng Garment – registered the Chinese name under which Hermès is known in China, Ai Ma Shi. The registered name is very similar, with the same pronunciation, but with a slight difference in one of the characters (爱玛仕 / 爱马仕).  A tribunal, asking it to prove that its name was well known in China before 1995, has recently dismissed Hermès' petition.  But as it turns out, even if the brand had registered 'Hermès' in China in 1977, it had failed to register a Chinese name and, apparently, still has not done so.  Besides, the evidence requested by the court and given by the brand concerning the reputation of Hermès in China ... takes Hong Kong as a point of reference.
The issue of a Chinese name (subject I covered on Brandwatch in 2009) is crucial for all brands. They absolutely have to adopt a Chinese name to reinforce their reputation - and to do so, follow a few simple rules.  In fact, most brands make two mistakes when tackling the Chinese market: 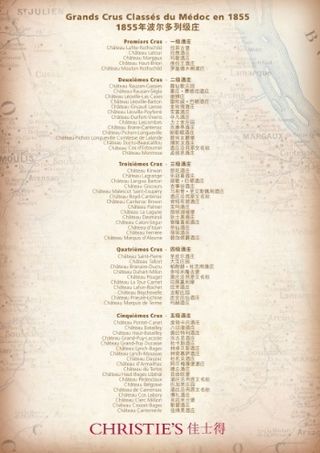 The confusion reaches a peak when a third party offers to draw up a list of Chinese names for brands that do not have them. Christie's decided, a month ago, to publish a list of Chinese names for the famed Medoc wines of the 1855 classification: they had to withdraw the list in question in a panic following protests from some of the wine companies in question - which are now in the process of officially registering their Chinese names!  Wine brands are therefore going to make up for lost time ... but what will become of the Chateau Cos d'Estournel that has decided not to adopt a Chinese name?

A controversy arose a few weeks ago in the Chinese media over "China's National Liquor", the Maotai (a white alcohol obtained by the distillation of sorghum). Produced since the Han dynasty, gaining great popularity in the course of the 18th and 19th centuries, this alcohol is now produced by several companies; two of which were featured in a recent Hurun Report:

The price of a bottle of Flying Moutai (their best seller) is now around € 200 – as compared to € 4 ten years ago - and some bottles even fetch a price of several thousand Euros. We are therefore looking at an undeniable shift towards the up-market bracket – of a product where quantities remain limited (see graph), allowing the brands in question to realize a net margin of 28% to 45%.
The controversy was very well recapitulated during the TV show, below - raising the question that was echoed by all the media: "Is Moutai a vector of corruption?"

The Hurun report clearly illustrates the role that Moutai (like all luxury brands) plays in the Chinese tradition of gifting presents but the reaction to the classification was strong: an official from Shanghai (China Daily, 14 January) even went so far as to propose a ban on serving Moutai at official banquets. Jing Daily quoted the official response of the brand:

"While most brands would be thrilled to be included in such a list, yesterday Maotai spokesman Ye Yuanhong (叶远鸿) categorically disavowed his brand’s inclusion, telling Chinese media, “In regards to being included in Hurun’s luxury brand list, Maotai has never claimed itself eligible to be considered a luxury brand. We don’t know anything about Hurun’s list, and wish to distance ourselves from it ".
Here we find two of the debates that are stirring up opinions in Chinese society, especially amongst its ruling class - whose main objective is to maintain a sort of social harmony and therefore to prevent inequalities from growing too much:

Yet, the fact remains that Moutai and Wuliangye possess all the ingredients that could make them true luxury brands (like our Cognac or Champagne) – however they lack, like all Chinese luxury brands, a key element: the skills in luxury brand management (creating a brand DNA / recruiting proper talent / distribution strategies, etc.).

Grand Marnier, like many traditional French liqueurs and spirits, has been confronted in recent years with a difficult situation: the traditional consumption of these products has eroded in France and the tastes of new international consumers lean towards more modern products (vodka-, rum- or tequila-based). Cognac therefore "reinvented" itself, playing on both new audiences (African-Americans and Chinese) and new products (cognacs that are less "intense", lighter and fruity). But what happens in the case of a liqueur?
In the last few years, Grand Marnier has offered a response that may be summarized in 4 points:

This last point is quite an innovation: Global brands of wines and spirits have to find a balance between the different ways their products are consumed locally and the need to have global consistency. All too often the regional marketing managers launch local campaigns which attempt to adapt to consumers, but which lose sight of the coherence of the brand. The Grand Marnier campaign has found a way to reconcile both with skill:
The strength and consistency of the brand are thus well defined, the brand finds itself at the centre of a modern way of consuming wines and spirits – and each region can adopt the message in the manner it wishes.

Kraft Changes its Logo and Expands its Consumer Services

Two years after splitting from Philip Morris, Kraft Foods has changed its logo – with the intention of clearly differentiating its corporate brand "Kraft Foods" from products sold under the brand name "Kraft". Until then, the same logo had been used for both.

The change resulted in a resounding flop: The corporate logo unveiled in February 2009 was modified 4 months later! In fact, the logo of February had several flaws that were immediately pinpointed by various commentators: A very "amateur" finish, inelegant, over-the-top, with a motto too closely "fused" to the logo itself, where the emphasis on the word "delicious" lacked subtlety. The final logo therefore remedied all these faults.

I like to draw your attention to the new slogan "make today delicious”. By reintroducing taste in food, Kraft Foods followed one of the key consumer trends that I often speak of on BrandWatch. This approach is associated with significant investment in free consumer services "To provide assistance and solutions”, as this video shows: 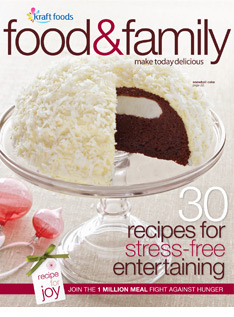 "The future is how you provide utility to consumers": This phrase sums up the new role of national brands. They have to be able to provide also the non-commercial to consumers by integrating the various distribution channels and communication: The demarcation between the two is fading from day to day. In this regard, the recent decision by Kraft Foods to charge for its “Food & Family” magazine is

How a Brand is Devalued – the Kronenbourg Case

The Brasseries Kronenbourg sales fell from 893 million Euros in 2004 to 829 million in 2008. The brand lost market share in supermarkets in favour of its competitor Heineken, which is vying for first place.

How can this historical regression of an iconic brand be explained? The answer is to be found in major strategic errors which affected the brand's identity. To understand the situation one has to see it from three angles.

Firstly, the pedigree of the brand: Kronenbourg has its roots in bars, in small cafés, in popular spots and conviviality. One may recall the 1980 campaign, "Faites mousser les bons moments  ("Whip up the good times"), followed by that of the 90's with the "Kro" waiters.
Kronenbourg is a people's beer but shared by all segments of the population.
Then two facts concerning the beer market:
Faced with this situation two mistakes were made, both with regard to the packaging:

So on the one hand one tries to up-grade Kronenbourg by renouncing its popular roots, and on the other, makes it resemble a private brand. Contradictory moves that only increased the customers' alienation, increasingly perturbed by a quasi-permanent promotion policy (with a view to counter private brands).
I draw two key lessons for brands from this example:

Bottled spring water, Crystalline, is sold at € 0.16 per litre (large size) and bottles of 50cl at 0.50 € per litre. Montcalm, a spring water often found in health food shops, is sold at € 0.60 per litre. Mineral waters are sold between € 0.25 (a private label) and 0.66 € per litre (Hepar).
But what can justify selling mineral water at € 4 per litre, or 8 times the market price? An "environmental" argument, and fashion trends, of course.

There is currently, at Monop' and at Chez Colette, in the Grande Epicerie du Bon Marché – and therefore in all stores in vogue in Paris - a new brand of mineral water: Aquapax.
It claims to be a "revolution": the use of Tetrapack (75% recyclable). The packaging expresses its respect of the planet in many ways: "Planet conscious natural mineral water" / "Recyclable" / "Sustainable" / "A pure thirst for the environment".... This water was launched by a company (Drinkyz), specialists in made-to-measure private label beverages: it is presented as a real breakaway from market codes (where plastic dominates), and as the first mineral water respectful of the environment. The cardboard is reusable.
Environment protection suffers from this kind of product: unaffordable products - reinforcing the idea that to be healthy and protect the environment you had better be wealthy - and products that are based solely on marketing - all of which proves that it is nothing else but a (commercial?) "coup" and not the creation of an authentic brand.

Two recent examples in cosmetics and spirits, in countries as diverse as Spain and Great Britain show that private labels can also innovate in matters of design and packaging identity.
Mercadona recently launched a private beauty label for men: "9.60": a simple collection inspired by sport and exercise, with flexible packaging, easy to grasp and which can be carried in a gym bag. What is most striking is the modernity of the design: 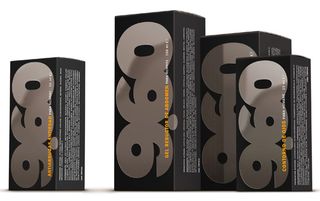 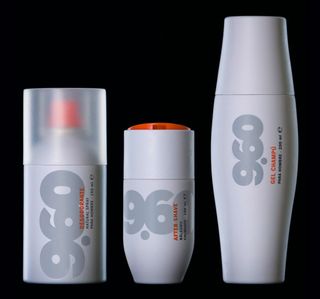 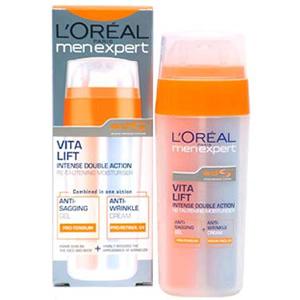 Of course one cannot help thinking of L'Oreal Men Expert: the same grey case, the same white and orange dominants on the volumes. But we find ourselves in a modern world, stripped of the superfluous, with great impact.
Marks & Spencer has completely renovated its line of private label beers and ciders. The result is breathtaking and truly breaks the codes of the category ... while being imbued in them. Indeed we find the classical codes harking back to their origins, but treated in a very contemporary manner, with flat areas of colour, drawings ... Here we are very close to the Apple universe (remember the ads for the Shuffle?). 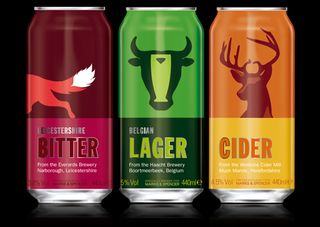 The third example does not yet exist and has been created by a design graduate but seems the most interesting to me: he suggests to Sainsbury to give a new identity to the packaging of its fresh fruits and vegetables. The objective is simple: how does one visually convey the origin of these products, show the distance travelled and the corresponding carbon footprint? The answer is immediate and simple: by adopting airline transport codes. 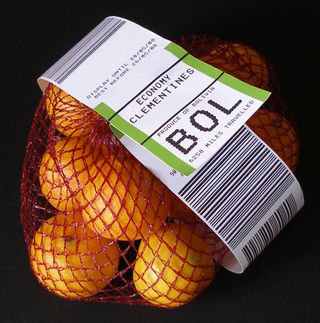 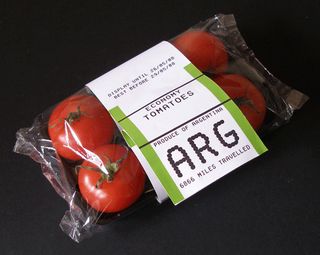 These three examples show that private labels can discard the "me too" and they are reaching a point where, just like any national brand, they can become inventors of graphic codes ...