Li & Fung - From brokerage to brands

We have just learned of two successive acquisitions of European luxury brands by Fung Brands Limited - an investment fund (attached to Fung Capital Europe) owned by Victor and William Fung:

It seems to me that this is the right moment to decipher the strategy of the Li & Fung group. I suggest we take a closer look at 6 key factors:

Li & Fung has therefore become a global Chinese group in a few years, having all the expertise needed to develop brands - from mass market to luxury, from fashion to beauty. They are now incontestably a major player that one should watch closely!

Lierac just introduced its new corporate identity at the recent Pharmagora exhibition. This is a revolution for a brand whose graphic identity was, so far, quite "reserved".  Nevertheless, one fact has become evident:  with the systematic use of gold and pink, the brand is positioning itself in the high-end women's category.  This is far from the pedigree of the brand - which is rooted in plants and research.   We therefore have a brand - sold in pharmacies - whose graphic codes are the opposite of its position. Inconsistent. 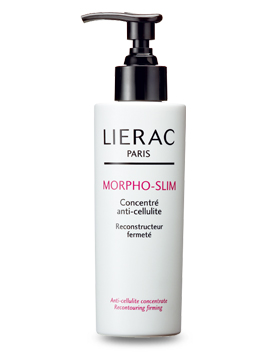 This new identity creates at least as many problems as the old one did - but for different reasons: 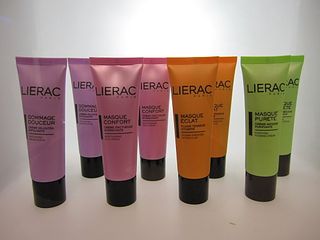 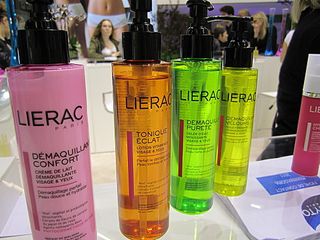 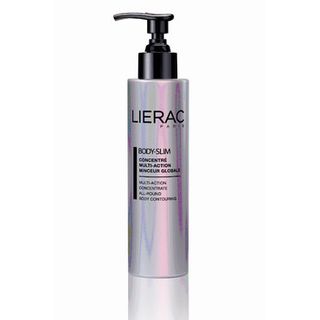 We have fallen into a combination of two very different trends heads first:

We immediately understand the instructions given by the brand: "Give us back some modernity!"  Alas, this comes at the expense of the identity of the brand, which, again, forgets its roots and does not highlight what makes it strong.  Anyhow, at least they will not go unnoticed on the white shelves of the pharmacies.

At last, brands interact with their clients!

Last week I praised the interactive website that Lancôme created in China (rosebeauty.com.cn), while deploring the fact that too few brands were willing to engage in a real dialogue with their customers through social media.  Now here are three examples to reflect on - one that would earn a "Could do Better!", and two that call for a "Bravo!":

The Starbucks website is undoubtedly a model that is exemplary. But it requires a considerable investment in human resources for monitoring, and tangible commitments. At the same time, Disney announced the acquisition of Togetherville - a new social network for children under 10 (and their parents).  Brands such as retail chains will have to follow suit, their customers are expecting it.

In the report drawn up in 2010 for Eurostaf ("Private Label Beauty Brands": see details in the left column of BrandWatch), I identified four strategies among beauty private labels - one of which seemed to me the most promising: creating exclusive brands. Two recent launches in the U.S. show that this strategy is forging ahead.

Tesco - whose three-level private label strategy is emulated by many retailers – had been paying scant attention to the graphic identity of Tesco, its core range brand.  Although its premium private label, Tesco Finest, was the subject of much attention – and was widely copied by specialized department stores in France and in Switzerland, the private label, Tesco, particularly in Beauty products, stayed very basic (as is the case among a large number of distributors): 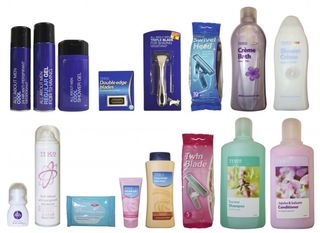 The situation has changed. Tesco has completely revised the graphic identity of this range. The outcome is even likely to reawaken a desire around this private label - a true stylistic harmony has been introduced, endowing the brand with a real personality, using modern colours, white, transparency - and the impression that it has been upgraded. 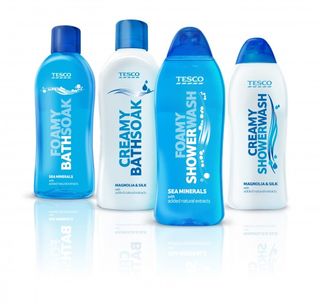 At the same time, Tesco introduced a range of hair-styling products called "ProFlex"- where we actually witness the building of a brand - modelled on what Boots has been doing for a long time. One can only regret that Tesco did not pursue this approach to the end – using Tesco simply as a brand "guarantee".

Tesco therefore still has to completely redesign its entry-price private label range that now has graphics so reminiscent of the Soviet era.  We can wager that this development will be widely emulated:  someone should decide to take the risk!

One after the other, Whole Foods, Procter & Gamble and Unilever (among others ... I could add Stonyfield Farm, KFC, Odwalla in food, to the list...) have announced major initiatives in terms of sustainable development - all of which relate to product packaging.

Two different approaches should be distinguished: 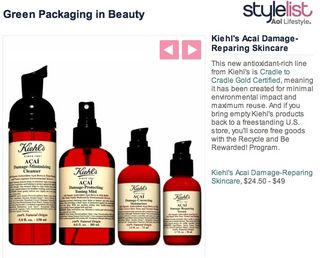 All these initiatives are particularly interesting: although they are dispersed, with very different approaches from one company to another, they illustrate the growing importance of sustainable development strategies in beauty.

Sam's Club – Walmart's "warehouse store" chain (customers pay $40 a year for access to storehouses where the products are displayed on pallets, at "discount" prices) – has just announced that they were introducing a new range of beauty products, SoPhyto. The launch made headlines at WWD recently and deserves reflection. 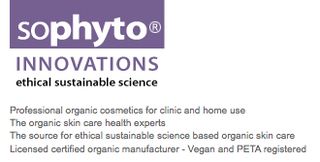 SoPhyto is a British brand of organic beauty products, certified by the Soil Association.  It claims a professional positioning, ethical, emphasizing the use of natural ingredients: until now it was sold in Medispas, medical offices and through e-commerce. 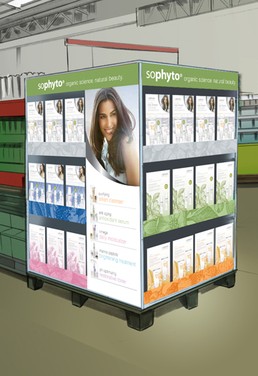 Presented on branded pallets, the SoPhyto products will find themselves next to L'Oreal, Olay, Neutrogena... This initiative raises some interesting questions:

Zara has made a 180-degree turn in its perfume strategy. I offer a quick analysis in the form of a "Before & After".
BEFORE:

This is a major change: switching from traditional perfumery - luxury / slow-moving / selective – to perfumery that is trendy / fast-moving / inexpensive. The Zara perfume is now conceived like the Zara collection: inspired by top fashion designers, with quality ("no compromises on the composition"), and rapid rotation.  Perfume thus leaves perfumeries to become an affordable product and an impulse buy in fashion boutiques.  The reason why this business model is likely to succeed lies in the rotation/price combination.  Until now, most often, fashion brands that boasted of their own perfume positioned them in the selective price scale (even those from Victoria's Secret are in the $25 / $50 dollar range). I am willing to bet that Zara's example will be carefully analyzed ... and copied.

In April, Danone launched a new brand of fresh products, but only in the Belgian market: Belorigine. It is, in my view, an important innovation that is worth analyzing. Belorigine is a range of yoghurts and milk-based desserts that have adopted local flavours (speculoos, Belgian chocolate, Liege syrup, cherry) and manufactured in Belgium (www.belorigine.be).
Belorigine is a real anti-private-label weapon, based on two strong consumer trends that we have already discussed on BrandWatch (particularly in my analysis of Eataly):

More than this, Belorigine has been given prominence in supermarkets with stands carrying the signature of the brand that present the entire range: one wonders whether this initiative concerns only the launch (as was the case with Essensis) or a true innovation accepted by distributors. Will we soon see brands taking floor space in supermarkets? 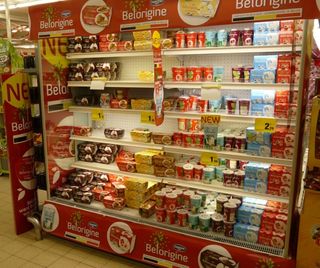 Health Allegations: Kellogg and Others 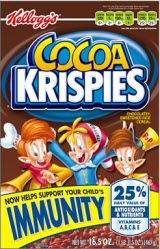 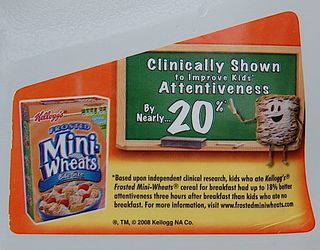 April 2009: The FTC (Federal Trade Commission) pulled up Kellogg (see decision here), which had proclaimed, on its packaging and in its advertisements, that its "Frosted Mini Wheats" cereal was "clinically shown to Improve kids' attentiveness by Nearly 20%".  Although only 11% of the children involved in the study in question showed a 20% improvement in concentration as claimed... 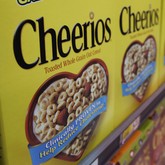 May 2009: FDA bans General Mills from claiming that their Cheerios lowers the rate of cholesterol (see the article in the WSJ blog).
November 2009: Kellogg is obliged to delete the claim that cereals build the immune defence system of children from its Cocoa Krispies packaging (see my post of November 7, 2009).
June 2010: FTC prohibits Kellogg from claiming that its Rice Crispies has health benefits...
... and the company decides, in order to settle this dispute, to avoid asserting the benefits relating to, "cognitive health, process or function provided by any cereal or any morning food or snack food", except if these claims were scientifically validated. 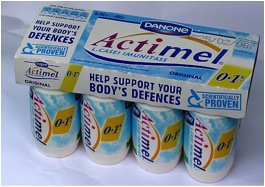 Actimel UK: Of course, this might lead us to think that all these examples only concern the U.S. - and that the new European regulations regarding health claims and nutrition claims will protect us from these marketing excesses. However, one of the major consequences of these issues was the withdrawal of Danone's Actimel and Activia files last April. Danone had also been targeted last October by the Advertising Standards Authority (UK) that banned an Actimel advertisement, stating that the health benefits claimed for the product had not been proven.

However, the most serious indirect consequences lie elsewhere: consumers lose confidence in brands, in advertisements and in their "green", "health" or "nutrition" claims (see the paper presented at the Sustainable Brands Conference 2010). By resorting to greenwashing and claims that are misleading, brands are merely feathering the nests of private brands.