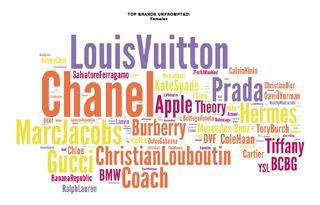 Do you know "Generation Y" (or the "Millennials")? Born between 1977 and 1994, they represent, for example, 25% of the American population and spent over 150 billion in 2009. This is the generation of social networking and Netizens, environment protection and NGOs, personalization and information seeking.

A fascinating study on their relationships with luxury brands has just been published in the U.S. (conducted by Scott Galloway of the NYU: "Generation Y Prestige Brand Ranking"). 450 consumers with yearly incomes of around $ 100,000 were questioned: the results are a subject for reflection. Here are a few of them: 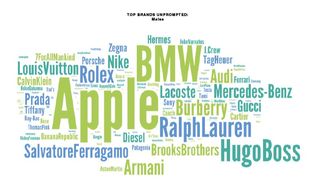 Luxury brands should draw several strategic lessons from this:

Another look at the new Japanese consumer

Last September I posted a couple of notes: "Luxury: Japan is not what it once was”. A new McKinsey study, "The New Japanese Consumer, has largely validated my analysis and identifies some recent developments that confirm that the behavior of Japanese consumers now largely resembles their counterparts in Europe and America. Here are some features to remember:


Luxury brands are directly affected by this reversal, as the recent changes in the Ginza landscape show - until quite recently one of the areas that luxury brands invested heavily in: 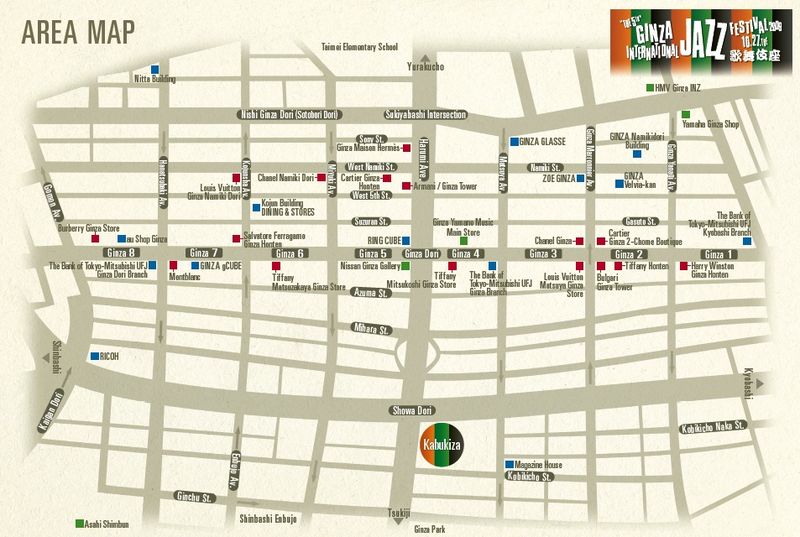 Thus "fast fashion" is investing the Ginza area - instead of luxury brands. The boom is over and they will have to rethink their business models (see my posts of September where I outlined various approaches). 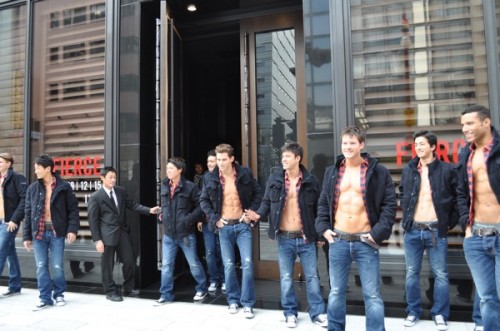 A few weeks ago I proposed an objective analysis of the Abercrombie & Fitch business model, where I contended that it is a pure marketing concept, and that progress cannot be based on a constant race against time.
Before its soon-to-be opened stores in Europe, it opened an 11-storey store in Tokyo last December. The Japanese fans of the brand (those who had purchased its products in the U.S.) contributed to make the opening a success but .... but the press immediately ripped it apart. They underscored 2 reasons to predict a dull future for Abercrombie:
Time will tell whether this is a wise choice or if the brand will, like others before it, close shop and retreat to markets more in line with its values.

Bain announces a stable 2010 for luxury goods (+1% on the basis of fixed exchange rates) after two disastrous years: 2008 with -2% and 2009 with -8%, which would set the global luxury market at 155 billion Euros, i.e. at the 2005/2006 level. Analysts diverge between the idea that 2011 will take off "like before the crisis", and fears that it has fundamentally changed consumer behaviour. I propose an analysis that is more nuanced – spotlighting the new complexities of the luxury market. This post is the first of a series on the issues of luxury – we shall return to study them point-by-point.
Let us first talk about markets:
Western markets: Many factors tend towards a questioning of conventional attitudes vis-à-vis luxury and to a revision of values.
Emerging markets are seen by most brands as their new El Dorado. I believe that one should keep one’s head.  In fact:
So, from a market perspective, the coming years will demand responses that are much more complex than those which most brands are used to.
Next week I will offer a follow-up of this analysis: I will address the issues of price, quality & service...

What strategies should luxury brands adopt faced with such profound change in the behaviour of Japanese consumers (see my post of 13 September)?

The McKinsey report suggests a number of tactics, without much originality, that have all been employed by luxury brands to a lesser or greater extent: reduce costs, strengthen brand equity, increase the number of distribution channels (Internet, mobiles, shop-in-shop, private sales ..), over-invest in CRM ...
I suggest tackling the problem at the base, from a luxury product customer's standpoint, from where one may draw some conclusions with regard to luxury brands.

Evidently, this does not concern only Japan. All the mature luxury brand markets are sailing in the same boat and the implications for brands that I point here reach far beyond that of Japan alone. They will have to practice more sophisticated marketing strategies, set aside the "one size fits all" that still implicitly structures their approach to markets... and not fall into the current magic idea that "China is our future El Dorado", because the Chinese market is going to mature much faster than the luxury brands could ever imagine.

Luxury: Japan is No Longer What it Was (1)

McKinsey has just published (August 2009) a market survey, "Japan's luxury shoppers move on", which has created quite a stir in the world of luxury: After interviewing 1500 Japanese consumers of luxury goods, they conclude that the habits of the Japanese are changing profoundly with regard to luxury and the significant decline in sales observed is not solely due to the economic crisis. "Some luxury players understand these changes and are adjusting to them, but many still believe that everything will return to normal, whatever that means, once the downturn has passed. Those companies may be in for a surprise". I propose to go through this study with you and analyse the main results. 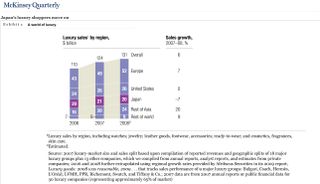 The Japanese luxury market is, according to market researches, either No. 1 or No. 2 worldwide: McKinsey estimates it at 20 billion $ (as against 26 for the USA)... but if one includes the purchases made by Japanese abroad, the most important clientele for luxury brands is clearly the Japanese.
But 2008 saw a 7% fall in sales of luxury goods; and 2009 is predicted to be even worse (some of the professionals interviewed by McKinsey speak of - 20% in the first quarter). However, one needs to go further back in time to realize that the real change took place in 2006, well before the crisis. 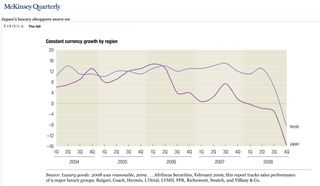 What happened?
The McKinsey report highlights 4 major changes, of which the first two are to me the most important:

The Japanese consumer is changing and luxury brands, carried away by the euphoria of recent years, will have to change their approach to this market: when Burberry has 75 stores in Japan and only 32 in the USA, Hermes 64 against 30, Prada15 against 35 and Bulgari 31 against 17 - twice as many shops in Japan than the USA, when the two markets are comparable to a large extent - one can only conclude that there is "something rotten in the kingdom of Denmark". I would be curious to know the trend in sales per square meter in boutiques in Japan...
This luxury is no longer that of exclusivity and rarity. It has to reinvent itself and Japan shows us that the Emperor is indeed naked ... I propose to revisit this subject next week.

Transmitting the Gestures of Beauty – an Issue

For several years I have persistently drawn my clients' attention to how women have forsaken the "gestures of beauty". I show them how the imparting of the gestures relating to face care and makeup, which are traditionally passed down from mother to daughter, have been lost, even in our Western countries. I explain that present-day consumers are at a loss: How does one use eye shadow? How is makeup foundation applied? What products should be used to cleanse the skin? In what order should they be used?

These questions are asked by women the world over. Japanese women find answers in the "self esthe salons" where, for a very modest hourly fee, they can go to skin care and makeup cabins where a beautician leads them through the practices for every day beauty.   But my customers do not seem ready to take the leap and take charge of these essential basics: When I tell them that one day a brand will use the rapport with clients a veritable platform and offer spaces where the gestures of beauty are re-learned, I see them nod their assent but I know they will merely review the designs of the leaflets in their beauty product boxes ... or hire a new make-up-artist.
The consumers themselves then take over. Using the Internet, they share these gestures and reclaim them. The New York Times (August 11, 2009), speaks of Lauren Luke, an English girl of 27 years who, in order to sell more of the beauty products she marketed on e-bay, chose to post videos on YouTube showing her applying these products. "For years I've been doing what the magazines tell you and wondering why I came away feeling inadequate ... we've all had enough of lies".   Twenty months after the first videos, they have been viewed by over 20 million people and her YouTube site has 250 000 members in 70 countries.
So when will a beauty brand really focus on the question? Unless Sephora does so (which is launching the Lauren Luke range of beauty products and organizes makeup competitions with her)?

The Obligation of Health: A Japanese Example

For the past several months, at all the conferences that I hold, I draw attention to the emergence of new social norms with which we are required to comply. One of them is the obligation of health: we have to do everything to stay in good health at all times. We must feed ourselves properly, avoid smoking, drink moderately (or even not at all): these resulting in campaigns on nutrition, fights against tobacco, against alcohol. Non-compliance with this new standard not only puts our health at stake, but endangers society as a whole: we then become a financial burden on society.

Continue reading "The Obligation of Health: A Japanese Example " »