Hyundai has just announced the creation of a luxury brand, Genesis - whose first two models had until now been marketed under the Hyundai brand: Genesis and Equus. Hyundai here is merely following the business model introduced long ago by Toyota (with Lexus) and Nissan (with Infiniti) and more recently by Citroen (with DS). Japanese brands realised long ago that it is impossible to develop a medium-end brand into a premium or luxury brand: Consumers have a definite concept of car brands and they clearly distinguish the mass market from the premium. This latter segment has been defined and invested by German brands (Mercedes, BMW and Audi) - and it is practically impossible to access it from the lower rungs. Renault lost a lot of money in a vain attempt to develop its brand into high-end sedans (remember the Avantime and the Vel Satis).

However the Hyundai approach is far from being as clear as it claims! "Hyundai did such a good job in executing its Genesis sports sedan and Equus luxury model and subsequent treatment of their owners that the brand had no choice but to spin off its own premium brand", says Michael O'Brien, VP of Corporate and product planning Hyundai America. But this is merely an idealized rewriting a posteriori of the real story.

Hyundai has always been positioned as an entry-level brand. Much work had been done on the design of the cars since 2007 (introduction of the concept of 'fluidic sculpture'), which enabled the brand to position itself at the entry-level end of the medium-end segment with models like Elantra (from $ 14,000 in the US market in 2010) and Sonata (from $ 19,000). Its new design had given the brand an undeniable appeal to Generation Y – in particular when compared to American brands. The consequence was that the brand outperformed the US market by an average of 10% until 2011. Since 2012 however the trend has clearly reversed, Hyundai underperforming in the US market by about 5%. What is this due to? 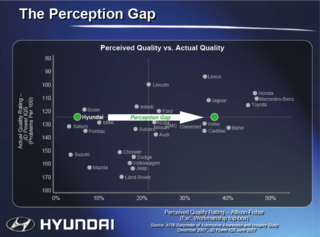 In 2008 the US subsidiary brought out a strategic document according to which there was a "perception gap" between perceived quality and the actual quality of the brand - and that its perceived low quality "stigmatized" it. It deduced from this that Hyundai had to reposition itself and move up to the luxury segment - and decided to launch two new Genesis models (prices starting at $ 38,000) and Equus (prices starting at $ 58,000). The brand – with a good mid-range image – was torn between the $ 14,000 models and the models over $ 60,000! Consumers no longer understand the brand and move away.

The decision to create a new premium brand is the consequence of this major strategic mistake: One cannot manoeuvre such a move to the upmarket segment except by losing one's customers. Hyundai was thus obliged to create Genesis and market the two models in question under this brand name. Hopefully this wise decision will be positive and that the two brands will be able to develop, each within its own segment.

Mercedes - which struggled with the French government this summer to be able to sell cars using a coolant other than that permitted by EU regulations, and is lagging behind its German competitors in the Chinese market (in 2012, its sales increased by only 4%, while Audi and BMW progressed by 32% and 41%) - had to also deal with media communication problems in the U.S. and Germany.


In both cases the brand shied away: it said that the video on service was not an official video of the brand but an initiative of its "service department". As for the students’ video, it displays a screen that says the spot has no affiliation with Mercedez Benz (non-authorized).
What do you think?