Clara Feder on Brandwatch: Why Art in a Management Blog?

Some people might wonder why I am sending out news concerning Clara Feder, a talented artist to be watched, in a Blog dedicated to Brand Management. Some might think it’s a bit farfetched, or even strange.
Well, thinking about it, it might be the right spot to do so. Here is why.

Take the Dior show at the UCCA (Ullens Contemporary Center for Art) in Beijing in November 2008/January 2009 where Dior commissioned 20 Chinese artists to create works freely inspired by Christian Dior. The result was amazing : from reinterpretations of the emblematic symbols of the brand to paintings with astonishing strength and modernity such as The Last Supper by Wang Quingsong. 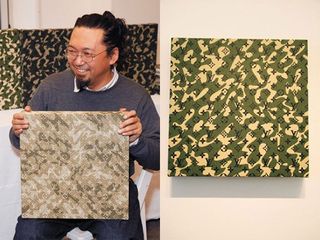 Take also the ongoing relationship between artist Haruki Murakami and Vuitton, which helped position the brand not only as a sponsor of the Arts, but as a trendy artsy brand in tune with the growing artistic awareness of the wealthiest. Initiated in 2003, this relationship gave birth to several new Vuitton bags as well as shows at the Museum of Modern Art of Los Angeles (2007) and the Brooklyn Museum (2008) where exhibition of paintings by Murakami and sale of products by Vuitton were intermingled. Not to mention the artist’s video work, among which the extraordinary "Superflat First Love" where, in a Manga universe, a young Japanese girl meets Gaston Vuitton through a magical chest that allows one to travel through time (2009).

Moreover, a significant number of major art exhibitions worldwide have the biggest names in luxury as sponsors,  as we all have in mind. (LVMH has thus been a patron of "Picasso et les Maîtres" ("Picasso and the Masters") / "Le grand monde d'Andy Warhol" (The Great World of Andy Warhol") / "Yves Klein", etc., and "sponsored" the creation of the stage curtain of the Grand Shanghai Theatre by Olivier Debré), their owners are often themselves distinguished collectors (François Pinault who installed his collections in Venice, in the Palazzo Grassi and the Dogana del Mare).

In our book “Luxury Talent Management” Gilles and myself demonstrate that creation is the critical dimension of luxury and that management of creative persons is a major issue for the brands. Luxury wouldn’t exist without creation, without crafstmanship and without its common roots with art.
The elites of the world at all times have sought the very finest pieces of luxury craftsmenship and the most beautiful art pieces to ornate their homes and show their strength. There is indeed a "genetic" relationship between Art and Luxury.

“Luxury and art are both expressions of emotion and passion; therefore, the idea of integrating art work in a store is a question of affinity” says Yves Carcelle, former President and CEO of Louis Vuitton.

This is exactly what I want to do in presenting here the work of Clara Feder, a talented artist who in Paul & Virginie Remix (Musée Grobet-Labadié, Marseille, October 4 to November 3) mingles the Old Master’s paintings and the museum's collection with the fictional world of “Paul and Virginie”, the 1788 best seller by Bernardin de Saint Pierre,

who with The Wall of Temptation (Lift France Conference, October 15 & 16) creates a worldwide participative performance event, both  on line and Live, in order to tackle the contemporary issue of Resistantce to Temptation and its complement, Desire For a long time, store windows were the only 'public' point of contact between brands and their customers - and too often neglected. Hundreds of square meters of showcases that just displayed products without creating a presentation, blindly following merchandising guidelines of the period. Only a few brands had understood that store windows were a unique space for telling a story: Paul Smith (by installing objects unrelated to the brand such as Dyson vacuum cleaners, old Vespas or by making them really amusing), and Hermès, belonged to this category.
Today, when the Internet is, without doubt, the preferred point of contact between customers and brands, they are rediscovering and reinventing the store window. They are becoming a place that narrates real stories, particularly where the encounters between art and luxury are the most visible.  Brands use them as a means of instant communication - attracting the attention of the passers-by and making them pause to admire it.
Here are some recent examples that are superb:
The Louis Vuitton store windows for the launch of the Kusama collection: 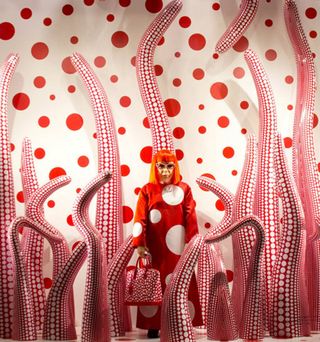 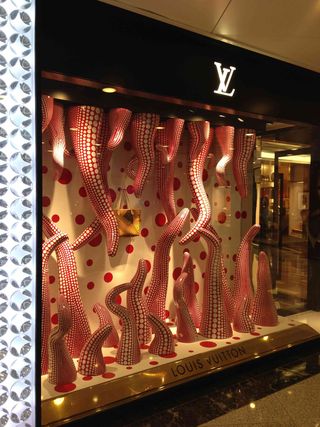 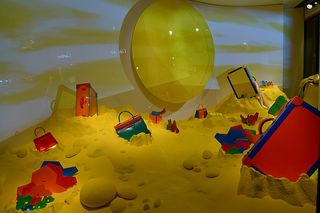 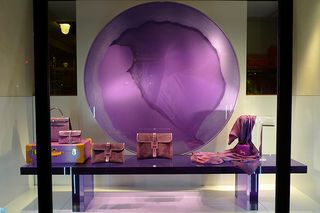 Bally rediscovers its history and its roots in the shoe business 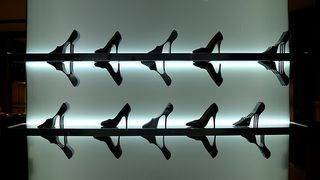 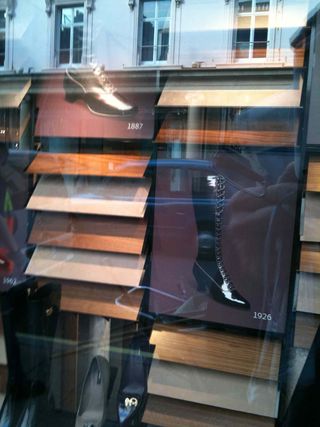 Starbucks sponsors the Edward Hopper exhibition... and makes it known 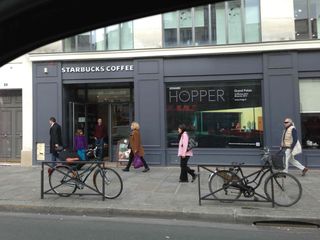 Vuitton - present on all fronts

Last month, Louis Vuitton opened a boutique of 150 sq. mts. exclusively for jewellery at the Place Vendôme – also installing its jewellery atelier on the first floor. This initiative has been hailed as proof of the upmarket progression of the LVMH brand which - with a location in the emblematic site of luxury French jewellery and its own workshop - acquires a stamp of legitimacy in a category where Cartier and Van Cleef & Arpels (the direct competitors of the brands of the Richemont group) shine.

Louis Vuitton - in this year of transition, which will see the departure of its iconic Managing Director, Yves Carcelle - is present on all fronts. I will focus on four major initiatives:

Louis Vuitton - with these numerous initiatives - confirms that it is one of the most innovative, modern and active luxury brands. It strengthens its business model (an exclusive distributor with its own network), its legitimacy as a global luxury brand (by entering new categories), its status as an active and creative brand (its collaboration with contemporary artists), ... and its presence in China, currently the largest luxury market. Yves Carcelle's "reign" will therefore end in a blaze of glory - but LVMH has announced so many successors over the last 10 years that some still doubt whether he will really be leaving!

La Trocade - Emotion at the heart of Contemporary Art 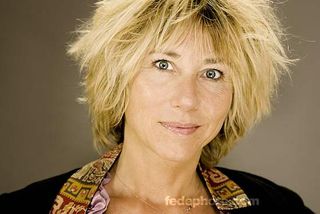 There were three thousand of them, on 25 and 26 November, who thronged to see the 85 contemporary works of art presented at a temporary gallery in the centre of Marseille. Since when has an exhibition of young contemporary artists aroused such excitement?  Ever since Emmanuelle Saint Denis, founder of Mouv'art, and her accomplices of Marseille Off 2013 decided to organize the first "Trocade" in France. What is a trocade (something similar to a sudden racing of the pulse, the instant attraction that whispers in the ear of a fan)?  Imagine that you absolutely want one of the art-works on display (and yes, it is in the realm of the possible because quality was the order of the day, quality for which the sponsor, Gerard Traquandi, was one of the guarantors).  So you want it.  So you spend five Euros on a block of post-its and you write down what you could barter in exchange for the work of art you so desire on some of the stickies.  Then you let yourself dream. 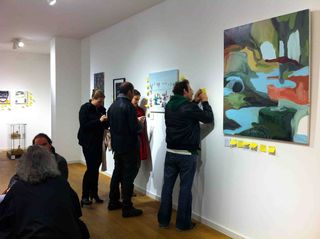 It's true, I was there. I saw the post-its: "your table against my mother-in-law for a weekend or ... lessons in Italian", "150 sq.meter house in Saint ... + garden + kitchen garden + a lifelong live-in relationship", "I offer Polynesian shamanic massages and/or Kundalini yoga", "one week in my apartment in Venice near the Grand Canal", "lunch daily for six months or more, negotiable", "an exhibition in my gallery "... and many, many more. 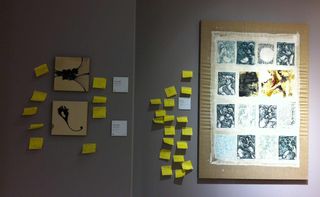 I was really touched by the testimony of some of the people I met by chance: "I let myself be dragged here by my friend; I'm not keen on art because it bores me.  But this is different. For someone with a life that is rather orderly, like myself, being here all of a sudden is like clearing the cobwebs from my head", "What I really like is that everyone is talking to each other ... ".  After spending two hours to compose just two post-its, someone came up to me, with great hesitation, "I've stuck my offers on top of the others near the two paintings that I adore, do you think I stand a chance of being accepted?".  For it is the artists, of course, who will choose the most tempting offer.  "The instant attraction works both ways", Emmanuelle Saint-Denis says to me. 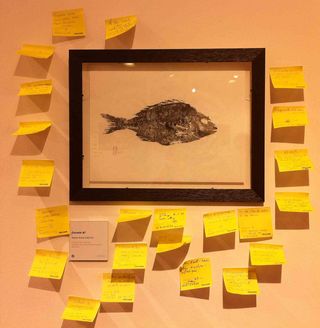 As for me, I looked at all these people who were admiring the compositions, gauging them in the light of their offers, their desires, scribbling on a post-it, then tearing it up and choosing another, and finally pasting it on the wall, nonchalantly, or carefully, or eagerly, like a game, or a joke, or picturing that they are meeting the artist, talking with him or her, winning the bid hands down in this novel kind of auction that is a far cry from the system through which we navigate through fair wind or foul... Seeing everyone so liberated, so happy, amused and enthusiastic, I couldn't help thinking that they were like a bunch of overgrown children playing at pinning their hopes on a wall, like pilgrims to Jerusalem, who place their slips of paper in the interstices of a famous wall of a far different kind.   And all at once, there was no longer a question of intellectual judgment, of strolling through a space too big, too empty, that dictates what one should think. It was all about fun and simplicity. Was it because no one talked about money anymore?  Was it because, suddenly, the visitors felt involved, active, creative?  I came out of this Trocade with my heart shaken, with the certainty that I had just heard one of those almost inaudible signals that, by force of converging, become stronger, make the old systems tremble and create the paradigms of the future.
Virginie Michelet
vm@virginiemichelet.com