How to Reinvent Gucci (2): Off With Their Heads!

In March 2014 I published a post in BrandWatch entitled "How to Reinvent Gucci (1): The current situation".  The facts were clear: Kering's flagship brand is stalling. More than that, it seems to become more commonplace and risks losing its aura as a luxury brand (proliferation of entry-level products, opening of too many stores, etc.).  Arriving on the scene in 2008, Patrizio di Marco had tried to reposition the brand from 2010 – by increasing average sales prices by 41% and reducing the ratio of "logo" products, which went from 85% to less than 50%.  But this was not enough to reverse the downslide.  The penalty was paid in December 2014: Patrizio di Marco (CEO) and Frida Giannini (Creative Director) are leaving the brand – the first on 1st January, and the second at the end of February after the presentation of the Autumn-Winter 2015-2016 women's collection (in fact she left earlier). Why this double exit?
I would like to pinpoint two fundamental problems of the Gucci brand - which probably weighed heavily in the balance while taking this decision:

About fifteen years ago I remember asking my friend, Hugues-Olivier Borès, then Marketing Director of Patek Philippe (and creator of the splendid campaign that established Patek's identity - 'You never actually own a Patek Philippe. You merely look after it for the next generation') why ALL watch ads showed the hands of the watch at 10:10 hours.  His answer had the advantage of simplicity: it is a tradition of the industry.  One only has to browse through any magazine to be convinced: every one of them displays the same time.
Chanel has followed this tradition since the launch of its first watch 'La Première' in 1987 as the image below shows! 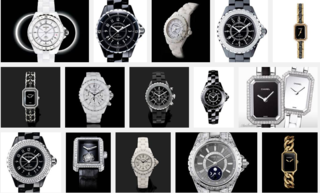 But Chanel decided to break with this tradition for its new campaign "L'Instant Chanel".  A campaign in black and white (as it should be, for a brand whose codes are… black and white), headed by Patrick Demarchelier, for its three models: Première, Mademoiselle Privé and J12.  This campaign stages moments that combine ordinary life and sports - where a gesture made by a man or woman coincide with those of the hands of a watch: the diver - 8:10 hrs.; the walker - 5:35 hrs.; lifted legs - 12:55 hrs.  A setting where the woman (like the man) controls the moment: the gesture is dynamic, perfect. There is total mastery of the body - perfectly consistent with the core value of the brand: control.  The Chanel woman is in control, is active, is alluring.  Chanel upholds an ethic of poise and control. 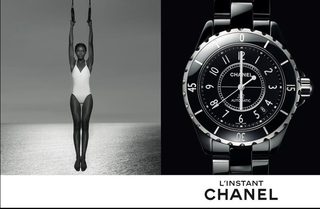 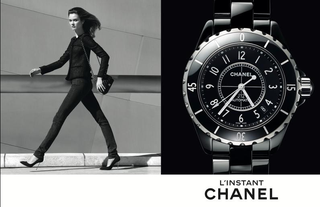 But Chanel is also thoroughly modern and knows how to break codes: the use of ceramic for the J12 is a perfect example (even if it was not the first watch using this material).  We have another example of it in 'L'Instant Chanel' - which hopefully will become a permanent device of the brand (even if others, later, of course, try to appropriate these new codes!).  We must pay tribute to a perfect example of coherence between a marketing campaign and the values of the brand (a consistency too rare, alas!). Enjoy a moment of pleasure: below are 6 short films made by Chanel for the occasion.