Kellogg's called into question on “natural”

In October 2011, the Cornucopia Institute (an American activist organization) published a document entitled "Cereal Crimes" - warning consumers about the extensive use of genetically modified cereals and the presence of pesticide residues that are injurious to health in the breakfast products of major brands.

This report might have remained restricted to those concerned by the issue, except that last April, a supermarket in Rhode Island (Green Grocer) decided to withdraw one of the products named in “Cereal Crimes” from its shelves: Kashi cereals from Kellogg's.  Even if they are USDA certified, these contain GMOs.

The retailer placed a notice on its shelf explaining its decision:

"You might be wondering where your favourite Kashi cereals have gone. It has recently come to our attention that 100% of the soy used in Kashi products is genetically modified, and that when the USDA tested the grains used there were found to be pesticides that are known carcinogens and hormone disruptors." 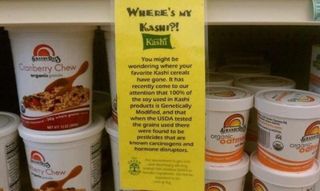 This image quickly spread through the Internet: consumers posted comments on the Facebook page of the brand, used Twitter to condemn the fact that a brand that projects itself as “natural” and certified was not beyond reproach.  They also discovered that the brand is one of Kellogg's - information that cannot be found either on Kashi’s website or its packaging. 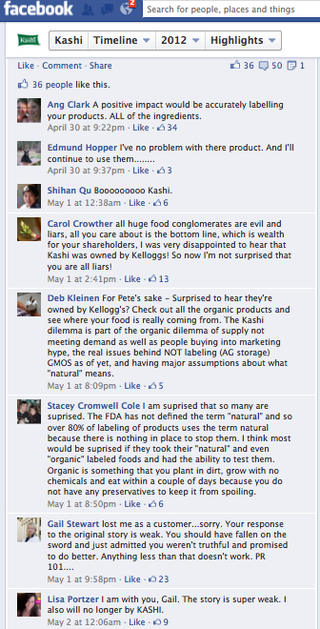 One can establish a parallel between this example and the information published by the Detroit Legal News: the growing number of suits filed against the "natural" claims of food brands in the U.S.A.  The most recent concern Ben & Jerry's, ConAgra, Frito-Lay, Kashi, Naked Juice, Snapple and Trader Joe's. The same article tells us that 95% of these complaints are squashed through a monetary settlement in favour of the complainants.

"Recent deceptive advertising suits that have settled include $550,000 paid by the maker of Nutella over claims that its hazelnut spread was a "an example of a tasty yet balanced breakfast" to a $2.5 million fund for a class of consumers who alleged Kellogg's falsely advertised that its Rice Krispies and Cocoa Krispies cereals could support the immune system."
One is able to take the liberty of making such farfetched claims in the U.S. for want of a legal definition of "natural", but the power of the Internet is now compelling food brands to rethink their positions: these examples illustrate the consumers’ growing demand for transparency.