A controversy arose a few weeks ago in the Chinese media over "China's National Liquor", the Maotai (a white alcohol obtained by the distillation of sorghum). Produced since the Han dynasty, gaining great popularity in the course of the 18th and 19th centuries, this alcohol is now produced by several companies; two of which were featured in a recent Hurun Report:

The price of a bottle of Flying Moutai (their best seller) is now around € 200 – as compared to € 4 ten years ago - and some bottles even fetch a price of several thousand Euros. We are therefore looking at an undeniable shift towards the up-market bracket – of a product where quantities remain limited (see graph), allowing the brands in question to realize a net margin of 28% to 45%.
The controversy was very well recapitulated during the TV show, below - raising the question that was echoed by all the media: "Is Moutai a vector of corruption?"

The Hurun report clearly illustrates the role that Moutai (like all luxury brands) plays in the Chinese tradition of gifting presents but the reaction to the classification was strong: an official from Shanghai (China Daily, 14 January) even went so far as to propose a ban on serving Moutai at official banquets. Jing Daily quoted the official response of the brand:

"While most brands would be thrilled to be included in such a list, yesterday Maotai spokesman Ye Yuanhong (叶远鸿) categorically disavowed his brand’s inclusion, telling Chinese media, “In regards to being included in Hurun’s luxury brand list, Maotai has never claimed itself eligible to be considered a luxury brand. We don’t know anything about Hurun’s list, and wish to distance ourselves from it ".
Here we find two of the debates that are stirring up opinions in Chinese society, especially amongst its ruling class - whose main objective is to maintain a sort of social harmony and therefore to prevent inequalities from growing too much:

Yet, the fact remains that Moutai and Wuliangye possess all the ingredients that could make them true luxury brands (like our Cognac or Champagne) – however they lack, like all Chinese luxury brands, a key element: the skills in luxury brand management (creating a brand DNA / recruiting proper talent / distribution strategies, etc.).

One of the Mega-Trends that The Scriptorium Company has been calling attention to for a long time is growing inequality and its impact on the behaviour of populations / consumers. Inequality leads to a feeling of injustice (especially in Europe), it destabilizes the social fabric (China is a prime example) and highlights the increasing polarization of the market (towards low-cost and "überpremium").  A study by the OECD published this month has just reinforced this analysis: "Divided We Stand. Why Inequalities Keep Rising" (the full report is available here).

The results of this study are crucial to understand recent developments all over the world: 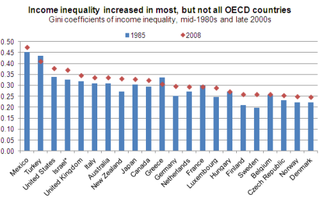 We therefore see that inequality has risen sharply in many countries and that it has very negative consequences on social conventions:

The OECD report asserts that the year 2012 will be a year filled with perils when various forms of social flare-ups will run shoulder to shoulder with the most unexpected upheavals.