A recent poll taken among American consumers came up with this contradictory result: Walmart is cited as the company that is the MOST responsible socially and environmentally, AND AT THE SAME TIME the LEAST responsible!  This apparent contradiction is masterfully analysed in "Triple Pundit": click here to read this excellent paper.
It brings up three essential points:

On the Bench : Considerations on Frank Gehry's Ethics & Aesthetics

The Canadian architect Frank Gehry, winner of the prestigious Pritzker Prize, in addition to his many spectacular achievements in architecture such as the Guggenheim Museum in Bilbao and the Walt Disney auditorium in Los Angeles, creates products for commercial brands. Together with Zaha Hadid, he is a renowned contemporary architect, the creator of very formal forms whose approach to the delicate is easily recognizable. These incursions are anecdotal at the moment, but even so, noticed and remarkable. He has already designed jewelry for Tiffany. Now he also designs furniture.

This photo shows the prototype of the Tuyomyo bench: this 3 mters long bench, created by the Canadian architect for Emeco, a U.S. manufacturer of aluminum chairs, was presented at the furniture fair in Milan in April 2009. The construction of the bench employs a manufacturing technology used in aviation, it is made of 80% recycled aluminum and weighs only 55 kg. The shape and the material used for this bench are original for this type of object. It is to be auctioned in New York in 2009 and the proceeds of the sale will be donated to the Hereditary Disease Foundation.
Seen from the front, we observe the combination of a sinuous line (four inflexions) and an angular line (five angles). The dips and apexes of the two lines are in phase and they connect at the three peaks. This "segmenting" of the two lines suggests a kind of gradual merging of one line into the other. Two interpretations are possible: either a downward movement which presses the top plate of aluminum with its smooth and approximative form towards the rigid mold of the angular shape, into which all concavity and convexity disappear. Or, on the contrary, an upward movement where the angular shapes are softened and flattened out to result in a perfectly horizontal plane.  A quote from Frank Gehry describing the bench (Internet site www.floornature.info ) confirms his desire for a twofold interpretation: "the form should be free and light, it must be structural in nature, and at the same time poetic, and a little dangerous".

When Chinese Rediscover the Beauty Products That Their Mothers Used

Chinese consumers are rediscovering the traditional cosmetics that they had progressively abandoned during the 90s in favour of imported Western brands. In those years, women who still used these products were considered "old fashioned" (laotu). The Shanghai Daily introduces us to these local brands in an article on May 26th last.   As a result of the crisis, Chinese consumers have begun to search for products that are cheap and effective: they found traditional brands, which have once again taken centre stage, in their supermarkets.

The return of tradition, the search for local products adapted to Chinese skin, budget constraints, we find here again (this time in China) the "cocktail" that is gradually changing the habits of the consumer.

For a long time now distributors have been eyeing the initiatives taken by Decathlon, admiring the work it does on its own brands and dreaming (yes, certainly...) of a time when they themselves will have such powerful private labels. For many years now Decathlon has sought to make its own brands genuine national brands - in direct competition with Nike or Adidas, for example. However, this perspective should be measured, keeping in mind that few brands have managed to flourish in the world of sports accessories ...
The latest Decathlon initiative puts the last touch to the work on these brands: its flagship store in Villeneuve d'Ascq has changed its merchandising by restructuring the traditional layout by type of sport. The space is now organized in boutiques: 16 of them (out of 18) are devoted to the Marques Passion (Passion Brands) of the retailer. Each boutique has its own checkout counter, and the checkout staff reinforce the sales and assistance teams. In this remodelled world national brands seem to be less in evidence. 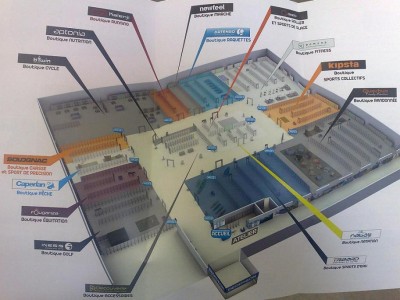 One can thus easily imagine a corner presenting the entire Sephora line, all the Boots brands grouped in a special section of the store (as is the case when they are sold at Target or CVS in the USA) … where all the Carrefour products are grouped together in a shop-in-a-shop .... That will happen, eventually.

One after another two news stories appeared on my screen:

Such examples will multiply. They are consistent with a number of consumer  "mega-trends" that I regularly mention on BrandWatch:

Even Walmart Can Falter ... Since December 2008 Walmart has been testing a new store concept in Arizona (to compete with Tesco's "Fresh & Easy"). This involves food supermarkets from 1,500 to 2,000 m2 (that is, half of their smallest size "Neighborhood Markets") called Marketside. "Who We Are: not just your typical grocery store": the signature and corporate colours (apple green and wine-coloured), immediately situate us in a world far more upscale than the traditional Walmart store. Dedicated exclusively to food products, focusing on fresh produce and meals prepared on site ("No time to cook? Count on Marketside"), these stores offer menus Téléchargement Marketside_Menu and products at the lowest possible price ("Marketside, where fresh costs less").

Designed to attract more demanding – and more affluent – consumers, the Marketside logo showed stacks of fruit and vegetables … and did not make any reference to Walmart.

One can understand this choice: do not influence the opinion of the targeted consumers with the low-price image of Walmart. But voila, it seems that this concept does not work so well because Walmart has decided (very discreetly) to change the name and logo of this brand: the fruits and vegetables are to vanish and a signature "by Walmart" will appear.

Walmart therefore reacted very quickly, realizing that the image projected by this site was too high-end and that consumers did not notice that the prices were indeed quite low. Outcome: reinstate the Walmart name to capitalize on its image and price.