The Consumers Take Over: Facts - and a Conference Internet, social networking, blogs, micro blogs and mobile phones are changing our lives and the perception of brands by consumers. But are the brands really aware of it?

As the authors of the report say: "internauts are consuming content". Social networking (Web 2.0) is therefore an extraordinary opportunity for brands - in terms of communication, marketing and advertising. How can one seize this opportunity?

A conference, organized by the Brand Science Institute, will be held on the 30th and 31st March in Paris to take stock of "Marketing 2.0 The Power of Social Media".  Representatives of traditional brands (Lego, Nike, Virgin, Nokia, Ford, Southwest Airlines, etc.) will rub elbows with "pure players" (Amazon, Facebook, eBay, MySpace, SlideShare, Google, Netvibes, etc.). "Best practices" will be analyzed and new 2.0 marketing tools will be presented. A must for merchandisers and "communicators"?

The New Trends in Food Retail in the U.S.

In my note of 15 February last I referred to the new American food trends - which increasingly resemble the European lifestyle. The same Hartman report, "Contemporary Food Trends", describe the trends they have identified in the retail food industry. Distributor brands would do well to pay great attention to them.

In the field, this results in:

The report states that the economic crisis does not upset these basic trends (like the search for premium plus products and better quality): it will temporarily delay or affect them, but it will not hold them up to question.

The Hartman Group published an extremely interesting report in early 2009 in the USA: "Contemporary Food Trends".  Based on extensive research and ethnographic surveys at sales outlets and consumers' kitchen tables, it describes the "products", "retail" and "restaurant" trends that will dominate in the coming years: Everything indicates that these trends are not so different from those we recognize in Europe.  We are witnessing a redefinition, by American consumers, of what they consider "quality", while evolving towards a real quest for culinary experiences:
•    A desire to give importance to little everyday pleasures - and not reserve this pleasure exclusively for "celebrations" or special occasions;
•    The sentiment that the pleasure of eating is based on sharing - and that the experience is as important as the food itself;
•    A progressive dissociation from "ready-made" products offered by brands.

Seen from this angle, it is clearly a rapprochement with regard to European customs and expectations, as I wrote in my note of 10 September 2008.  Consumers approach nutrition from a viewpoint that is totally new: they look for food, (preferably non-processed), that provide the nutritional benefits expected. It is a definite return to fresh products, to cooking, and a search for products that will provide expected health benefits. The authors of the study maintain, among other things, that "functional products" pertain more to the whims of the brands than genuine consumer expectations and that they do not perceive a deep-rooted tendency towards anti-oxidants. Health Expectations (undeniable) actually focus on 5 issues: "Inflammation" / "Digestion-Immunization" / "Energy" / "Heart-Bone-Cancer" / "Brain-Mood" ... and any "supplements" that are claimed will have to correspond to them. 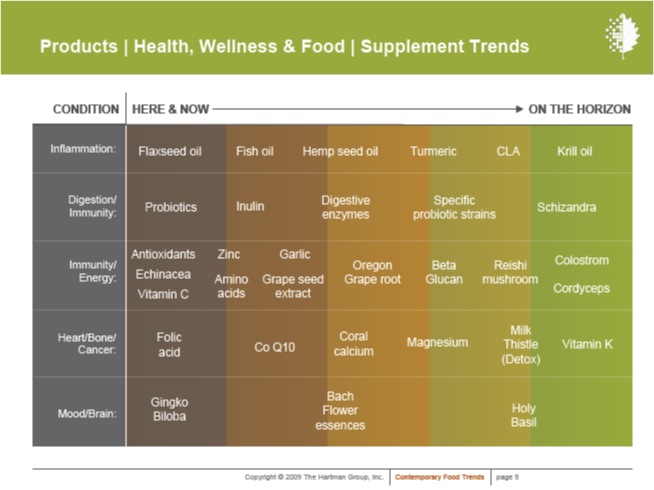 The authors of the study finally point out two important trends that we also notice in Europe:

•    "Slow Food", seen as a way to reconnect with the family kitchen, with the use of authentic products: "everyone has a right to good food";
•    Search for "authentic" products, varieties inscribed in our culinary heritage: what has been presented as the exclusive reserve of restaurants in the USA are quite evidently those that are the actual expectations of the European consumer.
These significant developments have an impact in matters of retailing and sales-outlets.  I will return to this subject next week.

At the end of 2008, delivery-boys of some twenty pizzerias in Philadelphia distributed their products in boxes decorated with unusual motifs: "Mushroom exports to the U.S." / "Arable and permanent crop land by country" / "Cheese imports by country", etc. The pie-chart graphs which they delivered with the pizzas were not really there to help in cutting the pizza, but were actually a message from The Economist to students: the pizzerias in question had been carefully chosen near the universities in Philadelphia.  Here is a message whose rationality is undeniable:  a "high end" business magazine invests the product most consumed by students (its future readers) by affixing on it economic information relating to the product and its ingredients. Here is an example those in charge of marketing should ponder: The Economist shows us that it is possible to create an innovative communication message by steering clear of conventional communication channels.

"Les Demoiselles from Beijing", or How Modern Luxury Communicates 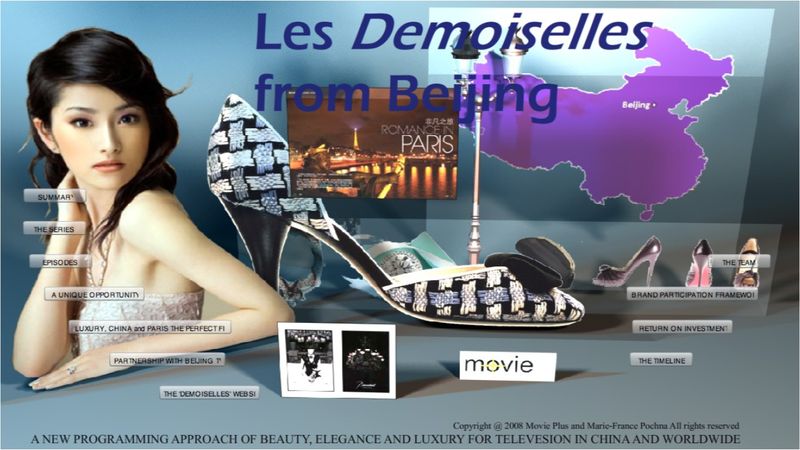 Consider a strategic issue that touches all luxury brands: the access to 10 million Chinese earning more than $ 25 000 a year that form the Chinese elite - and more than 300 million and more of "middle class" Chinese.
Admit that this middle class has little knowledge of luxury, its brands and its codes of elegance, but is more than eager to discover them. Admit that the traditional means of communication – the opening of boutiques and advertising in magazines - have had some effect, but do not really give access to the entire market. Imagine that China is like India, where according to Ernst & Young, the 6 large metropolis count for only 30% of the total consumption of the 100 largest cities. How does one reach all these potential consumers?
Decide to focus on the only media of communication that extends over the entire Chinese territory: television. Then decide to innovate by moving out of the "documentary" or "panegyric of the brand" category. Acknowledge that the most popular television programmes in China today are reality shows… pair television with an interactive website to create a community around the concept...
.... and there you have it:  "Les Demoiselles from Beijing"!

Kellogg's: From Product Innovation to the Banning of an Advertisement

In 1997, Kellogg's, interested in the breakfast habits of the English consumer, found that more and more young consumers under the age of 35 skipped this meal at home. In fact, lacking time, they purchased a snack on the way to work.  How could this fact be turned into a business opportunity when the brand had no foothold at all in the snack market sector? 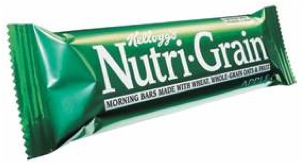 The response was called "Nutri-Grain": a granola bar marketed as a substitute for breakfast, with a slogan, "Good Food on the Go".  Kellogg's thus offered a transportable product with an attribute that, at that point in time, was not yet labelled "nutritional". 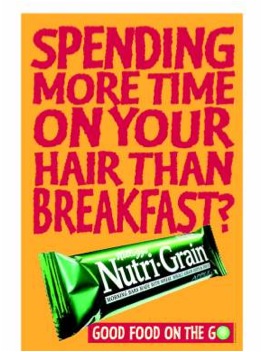 In fact, this product could not have been positioned exclusively in the "health" segment - very marginal at the time - that would have discouraged the mainstream consumer. The success was swift and the range extended with several new references. 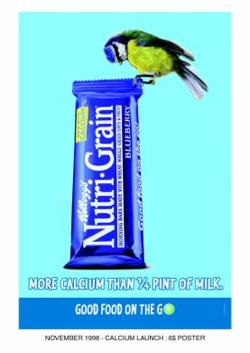 However, the "health" aspect gradually amplified, select advertisements highlighted this feature. In 2005, "the substitute for breakfast" angle was abandoned - to be replaced by a mix "tasty and good for health".  The trend that called for emphasizing a "nutritionally correct" message had left its traces.  The marketing team, seizing the new trend and relying on the "health" argument, until then only a secondary concern of the brand, decided to reposition it.  "Nutri-Grain" had lost its roots and forgotten that the consumer trend from which it emerged still existed.

In 2008, following a logic that called for an extension of its range, Kellogg's decided to launch a cookie, Nutri-Grain Soft Oatie.

Continue reading "Kellogg's: From Product Innovation to the Banning of an Advertisement" »

The New Consumer is Informed, Selective and Frugal

New York. Saturday 22 November 2008. Eight o'clock in the morning. The queue at the entrance of the Soiffer Haskin premises is already long: a wait of two hours to attend a by-invitation-only sale ("sample sale") of Bulgari. The watches are advertized at -60% and the bags at -70%.  In three days Bulgari will gross more than one million dollars and the stock will almost be sold out right from day one! 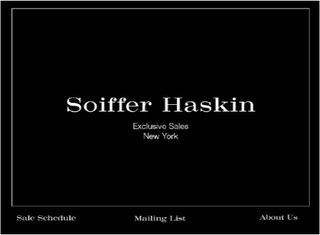 If you are in New York in February, Soiffer Haskin is organizing a Tourneau sale - excluding Rolex and Patek Philippe – discounts announced between -50% and -70% and a Dunhill sale.
If you wish to avoid the queues and long waits and you are a mouse-click expert, you can find by invitation only sales on the Internet offering discounts of at least as much: Gilt Group (Invitation Only Shopping - 36 hours of sale at -70 %) or Shopittome (which keeps you informed daily of discount sales of clothes in your favorite brand - in your size, of course!) in the USA ... and of course venteprivée.com in France. You'll find brand name products, but also apartments: in June 2008 Kaufman & Broad sold 52 lodgements (out of the 262 proposed). In 2007 Peugeot sold 92 cars with a 31% discount ... 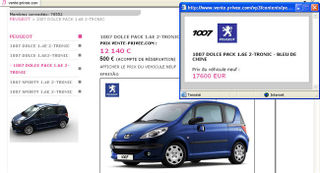 The consumer has turned into an expert, thanks to the Internet: Wikipedia, Google, the proliferation of sites for cool hunting, consumers, price comparison (do you know Pricenoia.com "Pricenoia: a disorder characterized by the systematic verification of international sites when ordering from Amazon", which allows you to compare the price of the same article home-delivered, on the various Amazon sites?). Today the consumer knows what there is in the anti-wrinkle cream of your brand and if its ingredients are "risky" (go see www.cosmeticdatabase.com) AND with sites like Shopittome or Pricenoia he is aware of the best price at any given time.

This has three major consequences:

Continue reading "The New Consumer is Informed, Selective and Frugal" »