The (Radiant) Future of Private Labels: Innovation at Safeway

Safeway, which represents 7% of the food distribution market in the US, carried out a total overhaul of its private labels in 2005. The company firstly reduced its brand portfolio to 10 (where there were dozens previously). These brands are structured according to the American private label model, significantly different from the European model: only the "core” private label brand carries the name of the company. All others have their own specific names (this is still, in France, the model followed by Casino & Intermarché – but for how long??).

At that time, Safeway created an organic brand, "O Organics", a battle-horse launched against Whole Foods: even its graphical characteristics are reminiscent of "360", the Whole Foods private label. In 2005 the turnover of this brand stood at 164 Million $, but increased to 300 Million in 2007 with a range of 329 references – which would make it the first organic brand in the US. In 2007, the O Organics for Baby, and O Organics for Toddlers, series were launched.

Strengthened by this success, in 2007 Safeway launched a new private label, "EATING RIGHT": a range of "nutritionally right" products with the slogan "combine taste and nutrition".

The (Radiant) future of Private Labels: the Boots revolution

In November 2005 BOOTS and TARGET announced a distribution agreement that was a real breakthrough in the history of private labels: Target stores would distribute in its outlets the various collections of health and beauty product marketed under the Boots brand name (No. 7, skin-care products / Botanics, natural products / Mediterranean , the bath product line/ Time Dimensions, the anti-ageing line). Thus, a British retail chain specializing in pharmacy - health - beauty, that created several private labels signed BOOTS, was to sell them through another distributor, at a counter with a dedicated sales staff present during the weekend. In 2006 Boots announced that it was doing the same at CVS. 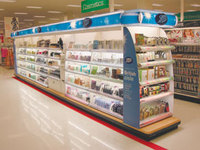 We are here in the presence of a true innovation in the traditional model of private labels: for once, the brand bearing the name of the distributor is marketed outside its own stores - and through another distributor!

Sephora will do the same by marketing its own brand (among others) at its counters at JCPenney.

Domestic brands are facing a new challenge that is considerable: they are competing with TWO kinds of private labels - the traditional distributor private label ("Sonia Kashuk" at Target) AND the private label created by another distributor!

I will revert to this rupture in a few days: we also find it in foods! We are definitely dealing with a major change to which manufacturers should pay close attention.

Auchan's (and others') lack of conviction

The press (Les Echos, 8th July) informs us that Auchan "has decided to launch its Chronodrive model, which it has been testing since April 2002, and which has so far been operating at 6 sites". Five launches are planned between now and the end of 2008 and 12 in 2009. This drive-in allows customers to draw up their shopping-lists on the Internet (where they find a choice of 7500 food items) at the same price as the hyper, pay online or on the spot, and pick up their order at a parking counter (1hr 30min later, minimum). A handler deposits the goods purchased in the car trunk. With this in view, Chronodrive is looking for well-located places, where they will install storage sites of around 1500m2. Here therefore is a very interesting distribution concept that is completely "disconnected" from that of the hypermarket or supermarket. And suddenly, this new type of distribution site can be set up with a very dense network – fully supplementing the supermarket network already set up. A very good opportunity for a brand to acquire an image of proximity and convenience!

But there is a catch. In order to acquire such an image among consumers, the network should bear the name of the brand – for example, AuchanDrive. But AuchanDrive already exists. It consists of the same concept but "attached" to an Auchan hypermarket. The brand thus finds itself with TWO brand names, where the more innovative of the two cannot capitalize on its name. The press, of course, tells us that Auchan is the "shareholder of reference" of Chronodrive and that the concept was created by two partners, but on the Chronodrive.com website the consumers see that they are purchasing Auchan private label products! Whatever the reasons may be (legal, capitalistic or otherwise) for this choice, to me it seems a real strategic error.

Note: My thanks to Lineaires for permission to use their Chronodrive photograph!

Continue reading "Auchan's (and others') lack of conviction" »

The future of luxury 2: Live Experiences that are Unique

In 2005 Pininfarina approached James Glickenhaus, film director, producer, head of an investment fund ... and Ferrari collector, and asked him whether he would agree to finance the creation of a new Ferrari, a unique model. The latter readily agreed and wanted the car to draw its inspiration from the mythical P models that had distinguished themselves in the 60's. Both parties gained from the ensuing contract of 4 million dollars:


Ferrari, which had not been informed of the project, discovered it when the car was presented to them in 2006. They decided to include it in their official catalogue and to call it the "Ferrari P 4/5 by Pininfarina".

Continue reading "The future of luxury 2: Live Experiences that are Unique " »