Product Placement is Not Exclusive to Luxury Products

As they do each year, the website www.brandchannel.com organises its "Brandcameo Placement Awards": Readers are asked to nominate the brands that have had the best exposure in the films of the year. Several luxury brands have converted this into a regular communications strategy. ARMANI is one example: Everyone remembers that Richard Gere wore Armani suits in "American Gigolo" (1980) and that the film enabled the launching of the brand in the US. But what is less known, is that Armani has since then created the wardrobes of 183 other films, among them, Pulp Fiction, Casino Royale, The Hulk, Spiderman, Minority Report, etc.

There are, however, three cases which I invite you to consider: 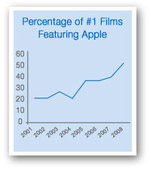 This mediatic omnipresence coincides perfectly with two other factors:

Continue reading "Product Placement is Not Exclusive to Luxury Products" »

The Future of Luxury 1: Custom-Tailored

Looking today at the roofs of Paris from the window of a room in a Parisian 'Palace', where the 450 sq. metres of the Royal Suite are rented out to the tune of 19,000 Euros a night, I asked myself, at a time when there is a constant increase of HNWI (High Net Worth Individuals – that is to say, people having a million dollars in financial assets – there were 10 million world-over in 2007, according to the Merrill Lynch World Wealth Report), where do the real issues with regard to luxury brands actually lie?

I shall approach the subject in the form of several notes in the course of the following weeks. I shall begin with the question of custom-tailoring (personalization).

One of the essential characteristics of 21st century consumers is their wish to stand out from the crowd. The consumer, no matter what his income level or his social profile, wishes to be recognized as a unique individual with his needs, his desires and his own history. Today, it is AMAZON, without a doubt, that caters to it the best:

"Hello, Michel Gutsatz, … discover the tips we offer you based on the articles that you already own … Those who, like you, bought (name of book) have also purchased …". And they propose a selection of books that I hitherto did not know about. I consult them, I discover rare pearls, I purchase.

Of course I know that it is nothing more than a software application that analyses my purchases but I have (at last) the impression that I have been recognized and offered products that really correspond to myself. No luxury brand that I have purchased has ever proposed something similar. Entering a boutique in search of a particular product, I have often been sent from sales-point to sales-point, when not actually treated with disdain.

My first recommendation to luxury brands would be to give each customer the feeling that they are unique and welcome. Here are some examples to ponder:

I began this blog speaking of this new social norm that is Health Obligation – using a Japanese example. An article in the New York Times of 7th July shows that this norm is indeed international: The American Academy of Paediatrics has just recommended cholesterol screening for children between the ages of 2 and 10, from families with a history of heart disease or diabetes or where the family history is unknown. If results are normal, another test is recommended within 5 years. "We are faced with an epidemic", said a member of the nutrition committee of the Academy. 30% of American children being obese, they may have serious cardiac problems that screening and the prescription of statins could reduce.

A new social standard is laid down: The obligation for each one, not to treat oneself when one is ill, but to forestall one's potential illness.

Phyto: What does packaging tell us?

Phyto has recently introduced a new format for one of its products: Phytoprogenium shampoo. It is an "eco-refill" carton. It is interesting to compare the traditional and the new packaging:

The traditional packaging is that of a "health-beauty" product dominantly "technical": using aluminium, a vocabulary that is reminiscent of an apothecary ... the plant specialist. The new refill pack immediately fits into the "fresh" code category: the Tetra Rex was traditionally used for milk and now for fresh fruit juices such as Tropicana, all preserved by refrigeration. The addition of a white cap only strengthens this assimilation.

Of course the cardboard is said to be "recyclable and from regulated and sustainable forests" – one finds the connotation "sustainable development" in the texts. However this is not what will be retained by the consumer – who will base their perception on what they see (never forget that, for most people today, vision & visual impact prevails over all other senses): They will think that the product contains precious ingredients that should be preserved by cold. What will they assume when they notice that the product can be stored at room temperature? Presumably that it consists of a marketing choice and not brand positioning.

Walmart's green conversion … and its consequences

On the 24th of October 2005, Lee Scott, the CEO of Walmart, gave a speech that was a landmark signalling the shifting of the brand towards sustainable development: "21st century leadership". Placing it under the auspices of Sam Walton ("Walmart started out as an idea of one man, 43 years ago…”) he proposed, "to better define who we are in the world" and to assume its responsibilities as the "20th country of the world".

He then made the environment the main focal point: "as one of the largest companies in the world, environmental problems are OUR problems .. There are not two worlds out there, a Walmart world and some other world", and he fixed three objectives for Walmart:

What is Walmart two-and-a-half years down the line?

Wal-Mart: What a logo tells us …

Sam Walton built a distribution chain based on a real vision of the world: a company deeply ingrained in the "community", with the will to give the middle-class American in rural America the access to consumer goods that those living in the large urban cities already enjoyed, and the promotion of family values: family, community, religion, patriotism ... and the Calvinistic values of thrift and savings.

This is reflected in the use of the colours of the American flag.

Sam Walton died in 1992: the logo was then altered to include a blue star. For Wal-Mart, this star is an emblem of the presence of its founder. It symbolizes his role as its guide. The logo also carried alongside the famous slogan, "Always Low Prices, Always" – the assertion of its positioning in terms of price that made it famous.

In 2008 the slogan and logo were altered again.

What does this change tell us concerning a brand for which symbolism is so present?

Continue reading "Wal-Mart: What a logo tells us … " »

The hidden link between Obesity and Purchasing Power

Numerous studies have highlighted the link between the intake of refined flours, carbohydrates, soft drinks, greasy snack items and cardiovascular risk and obesity. Based on this, many countries are advocating the eating of fruits and vegetables to fight against these scourges in order to stay healthy.

However, no one seems to ask how much it costs to follow these recommendations.


Continue reading "The hidden link between Obesity and Purchasing Power" »

6th June 2007: Opening of the first Whole Foods Market store in Europe, in London on Kensington High Street. 7400 m2 on 3 levels dedicated to natural and oragnic products. 100 different olive oils - many sold by the liter, 40 kinds of sausages, 425 varieties of cheeses, 40 different varieties of bread proposed at the entrance in a real bakery … An entire floor dedicated to restaurants with 11 different concepts (85% of the products are manufactured on the spot): a champagne bar, dim sun, a trattoria, a juice bar, a sushi bar ... cooking lessons, a spa ... A fascinating display of goods: abundance, abundance, abundance ... retail products, accessible, low sales shelves, alleys that are 2m wide...

All this evokes in us a positive vision of nature: the earth, nurturing and generous.

Demolition Party at the Royal Monceau

The Hotel Royal Monceau, acquired a year ago by Alexandre Allard, will reopen late 2009, with a new design created by Philippe Starck. This brings up the usual question to all the brands: How to be both absent AND present in the mind of the customer? How does the brand continue to maintain a close and emotional relationship while it is closed ?

There was, in 2004, the Vuitton response: when their flagship store on the Champs Elysees was closed for renovation, the building was wrapped in a gigantic … Vuitton trunk! In moreover, the wrapping was changed several times while renovation was going on.

Fully consistent with the history of the brand, the building stayed in the minds of its customers while the work was going on.


The solution provided by the Royal Monceau is splendid and completely renews the genre!

Starbucks: the "commoditization" of a visionary brand

One of the fundamental elements of brand identity was thereby reinforced: to offer a real experience to customers by creating a "third place" between home and work where they could relax and eat.

Starbucks had chosen to re-launch the legendary jazz label Blue Note - and allow its customers to discover niche music. This is how they actually launched Madeleine Peyroux and in 2004 released the album "Genious Loves Company" by Ray Charles. From 1999 Don MacKinnon, who had created the Hear Music label, spoke of "niche music that people do not get through regular commercial channels ... these little surprises can be one of the most rewarding things for customers."

In April 2008, Howard Schultz, seeing that diversifying into music did not have the expected results and was the focus of criticism from the press, dismissed Ken Lombard, president of the "entertainment unit", who he had himself recruited in 2004.

What has happened since then?

Continue reading "Starbucks: the "commoditization" of a visionary brand" »