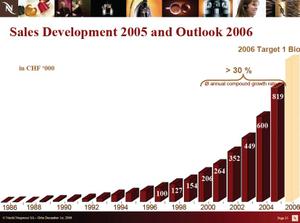 Everything has been said about the success of Nespresso: sales figures shown here are good proof.

However, analysts have not discussed one aspect so far: the price of coffee.

Of course the "first generation" iPhones did not have 3G, or GPS, of course the sales in France were not up to expectations: 100 000 units sold in April 2008 when this figure was expected at the end of 2007. Whatever the reasons, I believe that the publicity released by Orange in all the magazines in 2007 regarding the iPhone was a real blunder.

Let us look at it: What power! What consistency with the brand and its customary announcements!

Stop joking! This advertisement is commonplace, even "silly"!

Now look at the corresponding advertisement in the U.S.

I would like to share with you this video that gives us the measure of Walmart's strength and successful business model...

I invite you to visit the Apple Store on Regent Street in London: it resembles all Apple Stores in the U.S. As you enter the store two distinctive signs strike you, totally different from the usual principles applied to commercial spaces:

An amphitheatre where you can attend courses on various Mac software applications.

A "Genius Bar": a counselling and assistance area (by appointment made through the Internet) where "geniuses" help customers to resolve their problems.

Providing advice and assistance to professionals.

Why this decision to break away?

When distributors assess the brands (more) Whole Foods Market has created what the whole profession considers a certification label: "Premium Body Care Label." Arguing that there is no official definition of what a "natural" care product is, Whole Foods decided to establish a list of 250 ingredients (preservatives, fragrances, surfactants, etc.) regarded as unacceptable as they were toxic or where non-toxicity had not been proved - and verify whether the products sold by them contained any.

Beyond the notion of a label (which I will come back to – in recent months there has been a proliferation of new organic and natural labels!) I would like to point out that this is an approach similar to that of Hannaford "Guiding Stars" (see my note of 26th June). The question posed by Whole Foods is: "Which products meet our Premium Body-Care Standards?"

14th June 2008 – Le Monde - A quarter-page Monoprix advertisement: "While balancing your diet, might as well balance your budget". Monoprix is promoting cherries at € 3.99 per kilo. "Looking for fresh products with authentic taste and exquisite savour? Succumb to the sweetness of cherries and no longer resist their price".

Here is a clear message: Monoprix enters the debate on purchasing power and offers these cherries at a very reasonable price (a kilo of cherries at the time cost between 5€ to 6 €, or more) - while stressing on taste and naturalness.

But the sharp eye of the consumer-notices a sign: "€ 3.99* a kilo" … what does this asterisk indicate?

Randall Frost, an American writer, has just written a fascinating article that you can read on: http://www.brandchannel.com/start1.asp?fa_id=427 .

Why are so many American brands based on "green" ethical values - Tom's of Maine, Burt's Bees, Stonyfield Farm - born in New England ?

He proposes a very attractive hypothesis, confirmed by the founders of these brands: this region is strongly imbued with the values developed in the 19th century by Transcendentalist thinkers such as Ralph Waldo Emerson and Henry David Thoreau.

Little Extra: Beauty for Everyone

We only need to look around us: beautiful has become the norm. The work done on urban landscapes, in designing objects, renovating industrial buildings, testify to the fact that citizens / consumers now have an access to that which is beautiful. Yet there is a world that is completely impervious to this trend: Supermarkets, in their low-price collections.

Besides the fact that none of them claim them as their own (unlike Tesco that signs its Tesco Value), these brands display aesthetics worthy of communist countries during the Cold War! It seems that the marketers base themselves on the premise: Low prices are for the poor, so give them aesthetics for the poor!

In the course of my consulting activities , I often have to study various brands and try to understand their strategic choices with regard to customer expectations and behaviour.

This blog is, in fact, a notepad, where I offer to pursue, in the form of analyses, 'musts' and 'must nots', the destinies of various brands that exist in the world.

If you want to get in touch with me, please do so by mail michel@gutsatz.net .

The Obligation of Health: A Japanese Example

For the past several months, at all the conferences that I hold, I draw attention to the emergence of new social norms with which we are required to comply. One of them is the obligation of health: we have to do everything to stay in good health at all times. We must feed ourselves properly, avoid smoking, drink moderately (or even not at all): these resulting in campaigns on nutrition, fights against tobacco, against alcohol. Non-compliance with this new standard not only puts our health at stake, but endangers society as a whole: we then become a financial burden on society.

Continue reading "The Obligation of Health: A Japanese Example " »