In a recent announcement, the Chinese government has prohibited all TV programs that promote: “excessive entertainment and vulgar tendencies”, and earlier last year all outdoor advertising of “foreign things” and “hedonistic, high-end lifestyle” had been banned from Beijing.   Although these moves appear to be motivated mainly by politics  – in the face of growing inequality and creeping corruption, several upcoming leaders are now paying lip service to Maoism  –  there is nevertheless a popular sentiment of resurging nationalism, while the government is trying to redirect domestic consumption towards local creativity and crafts. In the context of such rather unusual events, how long will it be before authorities start curbing imports of global luxury brands that appear to encourage, say: “opulent consumption and offensive luxury”, or prohibit them from  opening more than one shop per city? Several multinational companies (MNCs) are taking this scenario as a real possibility.
The sentiment among Chinese state-planners, executives and even consumers, is that the largest marketplace in the world cannot be forever slave to imported lifestyle goods and that all the rich cultural heritage of the nation should be able to generate domestic luxury brands.  I am not talking about “designer brands” or “ethnic brands”, they already exist in many countries and some even enjoy a bit of an international cachet. We are also well past the model of fake “Italian” brands made in China, while the surrogates offered by the global brands  – a phenomenon that I would define as “adaptation” or “affiliation”  –   look more like defenses rather than solutions.
This is about a genuine Chinese luxury brand created for the affluent and educated Chinese, with the blessing of the establishment. But with a major difference:  that in order to be qualified as haut de gamme, it has to employ certain aesthetic inputs and to apply specific production processes and incorporate special materials that are today indispensable to a luxury product. All of these must come from the original “country-of-excellence”, which in the case of menswear is Italy. Since the company launching the brand is ultimately government-controlled and serving the military, this will be a “power suit” in every sense of the word.
What are the implications of this new formula, and why is it innovative? 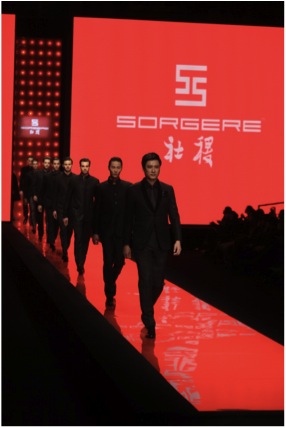 The only factor apparently missing from SheJi is the fabled “heritage” of global luxury brands. Yet the concept of addressing a cultural Sinosphere that spans the globe seems well grounded, and can give it a significant advantage in the local market. If proven a success, it could potentially be followed by other “national brands” in major new markets for luxury goods, such as India.  The international press has already understood the historical relevance of this event, and it has covered it extensively in just the past six months  – BusinessWeek, the Financial Times, Welt Am Sonntag, to name a few –  Chinese blogs and forums, and even the official “People’s Daily”.  But perhaps none other than global luxury brands should pay more attention, as their apparent dominance and seemingly unlimited growth potential in China may soon be affected by this cultural phenomenon and the underlying forces that have started it.