A Walk Around Place Vendôme - Mauboussin 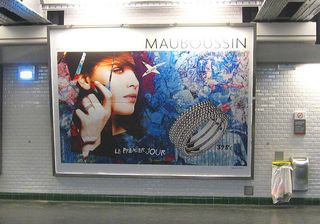 Mauboussin traces it's history to 1827 to a Monsieur Rocher who was succeeded by his collaborator Monsieur Noury In 1869.  Georges Mauboussin, a nephew, joined the firm in 1898. The business became known as B. Noury, G. Mauboussin. They sold jewelry in the prevailing styles - which means they had no style of their own.

In 1925 Mauboussin exhibited in the Exposition Internationale des Arts Décoratifs where they won a Grand Prix. By this time they were developing a distinctive style of their own. Mauboussin attracted clients amongst wealthy Europeans, Indians prince, American millionaires, and Hollywood film stars.

George Mauboussin's son Pierre Mauboussin understood the power of the silver screen. He bejeweled some of Hollywood's leading ladies. This was prescient: he required a credit for the jewelry to be assigned to the photograph. 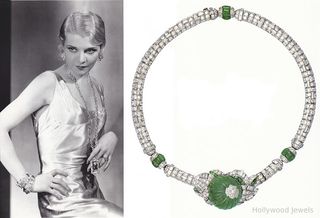 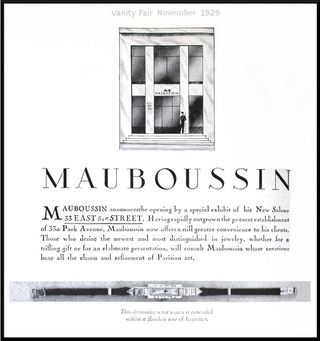 In the fall of 1929 Mauboussin opened a new salon in New York city, as it turned out it was very inauspicious timing.The stock market crashed on October 29, 1929. The great depression followed, and business suffered. The Parisian firm was left with a large inventory in America, they were anxious to withdraw with minimum losses. Mauboussin reached an agreement with the American firm Trabert & Hoeffer which would assume the name Trabert & Hoeffer-Mauboussin.
Trabert & Hoeffer-Mauboussin produced some of the most dazzling American jewelry of the 1930's and 1940's. The associated trademark continued until the 1950's. Mauboussin went on to open a store on Place Vendôme in 1946.

The  Mauboussin jewelry today is no longer even made in France according to Alain Némarq in a recent article entitled "Mauboussin le joaillier Iconoclaste" in the magazine 'Dreams:joaillerie,Été 2011': it is made in China. The jewelry can no longer claim "Mauboussin whose creations bear the charm and refinement of Parisian art". One of the distiguishing features of this brand was its "French-ness".  The recent styles are commercial, and look like the gem-set silver jewelry on offer in mass market retailers in America.  The TV shopping channel QVC also uses the name "Rose de France" for the pale-pinkish heat-treated amethyst seen in the ring on the right. Do you think the designs of Mauboussin's jewelry and watches reflect the brands essence and heritage? 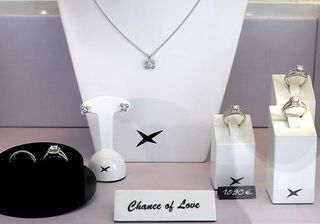 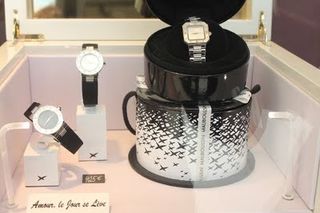 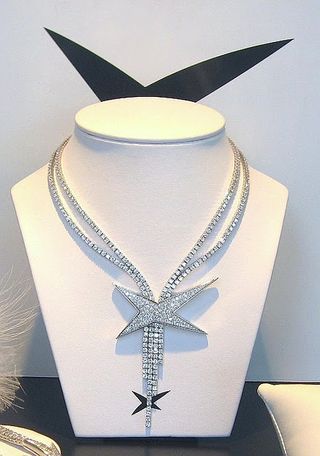 "Avoid sharp points and edges in jewelry", this was the first rule I was taught in jewelry design class.
This necklace reminds me of a ninja throwing star. "Lines curled around for blocks in Tokyo's Ginza district Monday for 5,000 tiny but free diamonds French jeweler Mauboussin was giving away in an attention-getting drive.
'The value of a diamond doesn't go down. And you never get tired of a diamond,' said Noriko Suzumaru, a 39-year-old housewife who jumped on a train from Kawasaki to stand in line after learning about the giveaway.
Suzumaru was among a crowd of bargain-hunters lined up for the 0.1 carat diamonds Mauboussin was offering to its first 5,000 customers. The gems are valued at about ¥5,000.
Mauboussin, founded 181 years ago in France, is encouraging people to get their free diamond made into rings and pendants at its store. But that will come at a cost, starting at about ¥50,000.
Mauboussin's flagship Japan store opened in Ginza in February.
But the store had often been empty because its name, though associated with international celebrities, isn't widely recognized among Japanese.
Many still don't even know how to correctly pronounce the name of the store."
From the Associated Press

Several months ago I was contacted by Marguerite de Cherval the author of two books about Mauboussin. She had been hired to produce an exhibition tentatively titled "Mauboussin 100 Years of Service to Women". She wanted to find out where the beautiful vintage Mauboussin Jewelry was that I had photographed for my books "Hollywood Jewels", and "American Jewelry : Glamour and Tradition".

Could a proposed Mauboussin exhibition be a first step in an effort to reconnect and re-evaluate their own heritage, and design capital?

I have always thought a brand should fulfill a set of promises. One expects it to deliver unique identifiable products that are differentiated. Consumers also want to be in the club of the cogniscenti with a well communicated story of the brand's origins and identity. When a brand is healthy it is evocative and informative communicating its essences though it products and services.  It accumulates goodwill and symbolic value that evokes an emotional response and builds consumer loyalty.

In Mauboussin's  radical departure from its heritage and design history I feel that few of these promises are delivered.

Van Cleef & Arpels was fully acquired by Compagnie Financière Richemont SA in 2003. Since then it appears they have been applying many of the proven strategies they have learned with Cartier: appointing a creative director and turning back to their heritage. They appointed Nicolas Bos, who has been with Richemont since 1992, as vice president and worldwide creative director of Van Cleef (he is also president and chief executive officer of the jeweler’s Americas division). Van Cleef & Arpels recently mounted an exhibition at the Smithsonian, Cooper-Hewitt, National Design Museum in New York, Set in Style: The Jewelry of Van Cleef & Arpels.   A joint website was created (link), analyzing their history and the evolution of the their style told through their stellar client's jewels, one iconic piece at a time.
What is the brand's heritage? Alfred Van Cleef, and his two brothers-in-law Charles Arpels (1880-1951) and Julian Arpels (1884-1964) founded Van Cleef & Arpels in 1896. Both of the families had been in the gem business for several generations. In 1906 they open a shop at 22 Place Vendôme, where they are still located today. They were joined in 1912 by the youngest Arpels brother, Louis Arpels (1886-1976). Their history is a long line of innovations and patents:

The new collection
Nicolas Bos, said the new collection, Les Bals de Legende was inspired by a photo of Liz Taylor taken by Cecil Beaton in 1971 at the Proust Ball given by Baron and Baroness de Rothschild. She wore a major gold and diamond necklace by Van Cleef & Arpels, woven into her hair.

Van Cleef & Arpels new collection is debuting along with the publication of a beautiful book Bals: Legendary Costume Balls of the Twentieth Century’ by Nicholas Foulkes published by Assouline. Read about the  book and jewelry party here.
The inspirations are the themes, personalities, and locations of these legendary balls. This evocative concept taps the yearning for a time of refined splendor and celebration. Guests attending these fancy dress balls dressed extravagantly,  they were resplendent and bejeweled. These were lavishly designed events, with dancers and music.   Attendance was by invitation-only.  The were famously photographed, and chronicled these balls are still talked about all of these years later.
I can't recall another jewelry launch tied-in to the publication of a book where the book is about the source of the inspiration, and not the collection itself. What a brilliant source this is, one that is so identified with luxury and desire.
A piece form the new collection "the kingfisher necklace" inspired by Baron Alexis de Redé’s ‘Le Bal Oriental’, 1969, which was one of the most extravagant parties ever given in Paris. The form of this jewel is that of a Chinese jewel. These jewels were made with actual kingfisher feathers. This Van Cleef & Arpels jewel is made with turquoise, diamonds, and pinkish-red spinels. 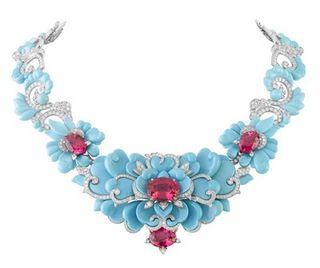 Image: WWD
The windows
The current windows are an ultra-modern chinoiserie, with shocking pink manga-colors. They communicate a progressive global aesthetic that is very trendy, feminine, and a little playful. 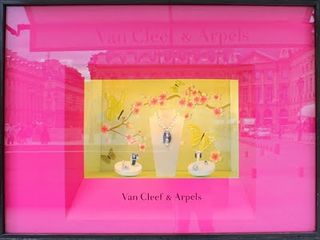 The new jewels are deeply enriched by  heritage of this house. Their fine jewelry competence is evident in the exquisite stones and flawless workmanship. 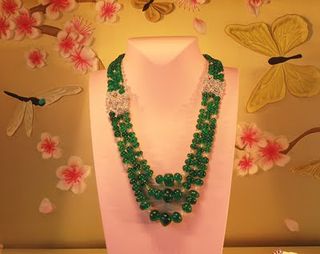 Emerald and diamond beads, with diamond set elements, in this multi-strand oriental style necklace,
which was inspired by  the Le Bal Oriental. 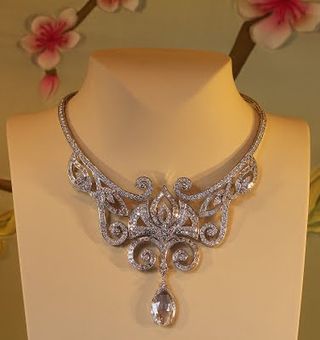 Diamond necklace with round, calibré-cut diamonds, and a diamond briolette drop. 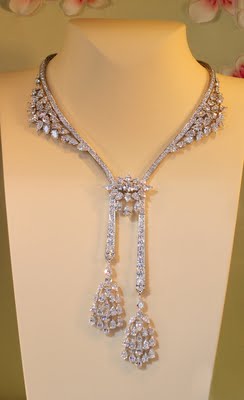 An elegant diamond necklace which evokes a lace collar, with  tassels.
This style necklace taps deeply into the the heritage.
The opulence of this new collection is heralding a new age of elegance.
"With regard to jewelry, Cartier and Van Cleef & Arpels were top performers during the year", said  Richard Lepeu, deputy ceo of Compagnie Financière Richemont SA, “a very broad base of merchandise and price points were driving sales in the jewelry division overall". He added, however, that sales of the ultrahigh-end items — those costing more than $1 million — were “less buoyant.”
WWD May 19, 2011
This comment was made before the debut of the new collection, which, I imagine, will prove that the magic of Van Cleef & Arpels is ever present. 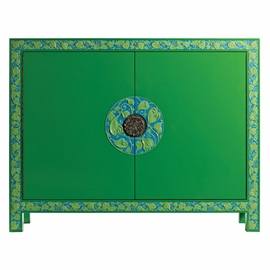 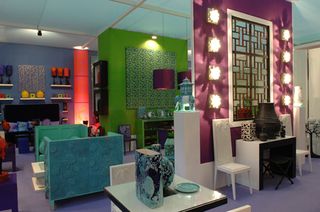