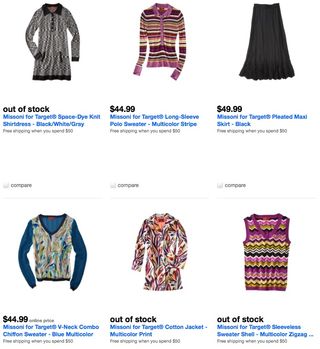 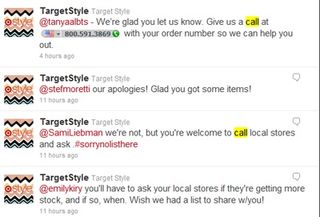 A Walk Around Place Vendôme - Boucheron 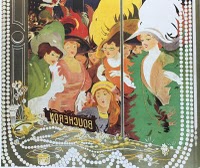 In 1858 Frederic Boucheron (1830-1902) opened his first Jewelry Salon in the Palais Royal. The Jewelry of Frederic Boucheron was imaginative and daring. He attracted some of the wealthiest and most notorious clients of his day. The grace, fluidity, and proportions of the 19th century Boucheron diamond pieces were remarkable. Following are a few examples of historic works by Boucheron. 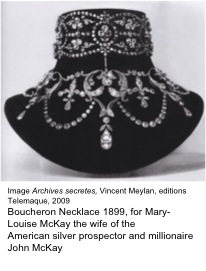 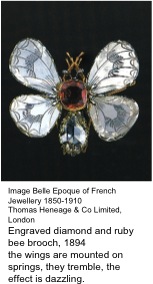 Frederic Boucheron eventually worked with his own in-house designers an craftsmen. In 1893 Boucheron has the distinction of being the first jeweler to set up shop in the Place Vendome. At 26 Place Vendôme, where they are still located today. Boucheron exhibited in many of the international expositions: the Philadelphia centennial 1876 / Paris exposition universelles 1889, and 1900 / The Chicago Colombian exposition of 1893. 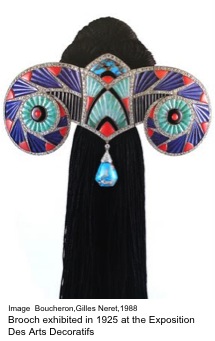 In the 1930's Boucheron attracted the new royalty, the movie stars of Hollywood.

During the early days of the acquisition of Boucheron, the Gucci group was under the over all design direction of Tom Ford who had revitalized the Gucci brand. Mr. Ford is a consummate fashion professional, but he was not a jewelry professional. He appointed the trendy Londoner, Solange Azagury Partridge, as creative director. I met Solange many years ago in London when she worked for my friend Gordon Watson in sales at his gallery.  She has no formal training in Jewelry, but worked with Gordon’s wonderful collection of 20th century jewelry and decorative arts. I do not know what she did at Boucheron or how  it translated into bottom line sales. The Gucci group has since been acquired by PPR, Tom Ford has been long gone, and Boucheron presently seems somewhat confused.

There have been several one-off design stints in recent years. From within the PPR stable drawn from Alexander McQueen, is McQueen's favorite jeweler, Shaun Leane. Leane  was chosen to design a necklace to commemorate Boucheron's 150th year of business. I like Mr. Leane's work: it is highly identifiable as "Leane", like post-modern crown of thorns, but is it "Boucheron"? 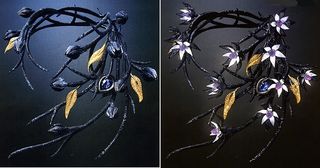 Marc Newson, the renowned product designer, created a mathematically generated fractal necklace. This was an interesting computer-age ultra-modern concept.  Yet it was not incorporated within an overall design and identity strategy. 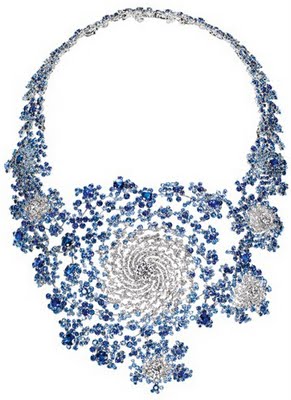 These individual pieces are like blips on a radar screen. The current Haute Joaillerie seems disconnected, unbalanced, stiff, and at times quite inelegant. It is a shame given Boucheron's extraordinary history.

When looking into the current Boucheron window it seems the displays are at times sloppy and incoherent: the products are not enhanced by the presentation, the displays are poor, the designs are totally unrelated. 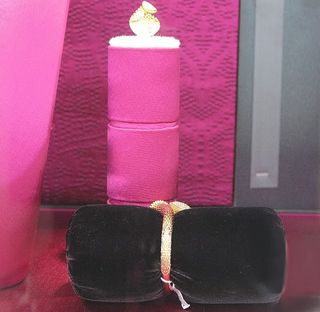 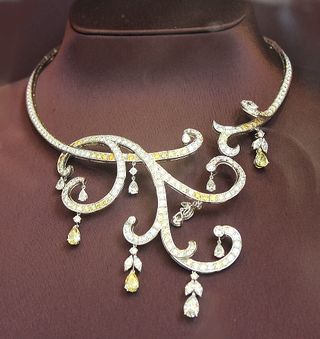 If the above pieces were not signed could you identify them as uniquely Boucheron?

In the Boucheron windows I have not seen differentiated style, iconic products, or a well communicated identity. There appears to be no guiding light directing how to utilize the brand's heritage and design assets to assert a coherent identity.
In my opinion there is a great deal of potential that is still under-realized.

Next door to Cartier at 9 Rue de la Paix behind a beautiful wooden facade is Mellerio dits Meller. The Mellerio family traces its origins to the Lombardy region of Italy in the 16th Century.

They were jewelers and goldsmiths. Some of the family moved to Paris in 1515. They prospered and became  royal jewelers  to the court of  Louis  XIII. In 1635 they were granted to use of of the name Meller. Hence Mellerio dits Meller. During the revolutions of 1789 and 1849 Mellerio relocated to Spain. In Madrid they were appointed as a supplier to the court of Queen Isabella II of Spain. 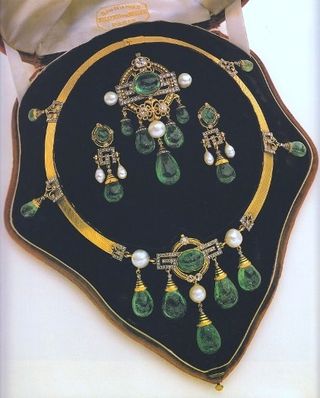 Tiara, 1867 made for Queen Isabella II of Spain
in the shape of a scallop shell
set with diamonds, diamond briolettes, and pearls.
The Mellerio family re-established in Paris. They participated in many of the international expositions. They exhibited in Paris in 1867, in Vienna in 1873, and again in Paris in 1878 and 1900. They also exhibited in The Exposition des Arts Decoratifs 1925. 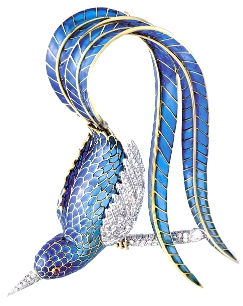 Mellerio brooch 1942
During the Nazi occupation  gemstone supplies were limited.
This bird's blue plumage is plique-a-jour enamel, which
is backless and as transparent as a stained glass window.
The French jewelry dynasty Mellerio dits Meller is still in business, and still in the original family: this distinguishes them as France‘s oldest luxury brand. Unique for this fact alone, but is that enough?
They are a family enterprise that has survived centuries of business, the reign of terror, various wars, and the Nazi occupation of Paris. They have catered to noble families and the wealthy elite with jewels in keeping with prevailing fashion in every stylistic epoch. Styles such as 16th, 17th, 18th century, Empire, Second Empire, romatic revivals, Renaissance revival,   archeological revival, Art Nouveau, Louis XVI revival, Art Deco, and the retro style of the late 1930’s-1950's. 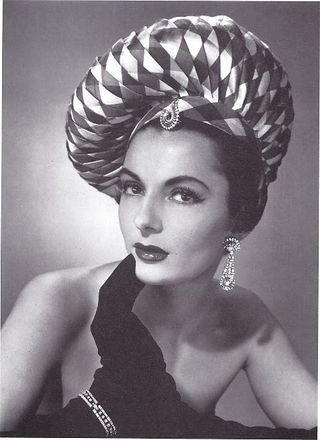 Mannequin wearing jewels by Mellerio 1950's
The most interesting thing about Mellerio today is their history. Unfortunately this history in not at all reflected by the products displayed in their windows. 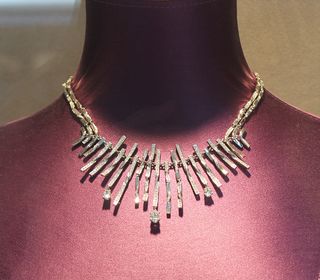 This ring looks like one of thousands available in the jewelers district of 47th street in New York City for the past 20 years. I am an American therefore I am not over-awed by the royal patronage associated with this jewelry house. What I want to see is a unique differentiated style, Iconic products, and good design. 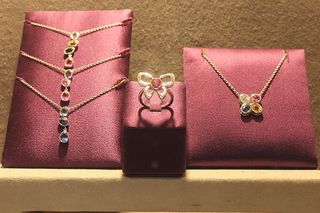 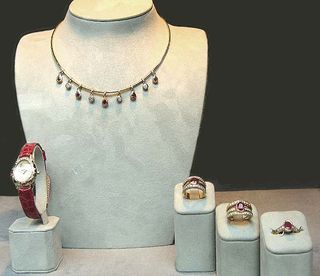 These jewels look like products sold in America, on TV shopping channels like QVC, and Home Shopping Network. The only difference is that these are 18 k gold rather than 14 k gold. The jewelry displayed in Mellerio's windows appears to be a random selection. The jewels are ultra-conservative and rather bland. I do not see a coherent vision, with unique differentiated style, iconic products, or particularly good design.This is a shame given their long illustrious history.